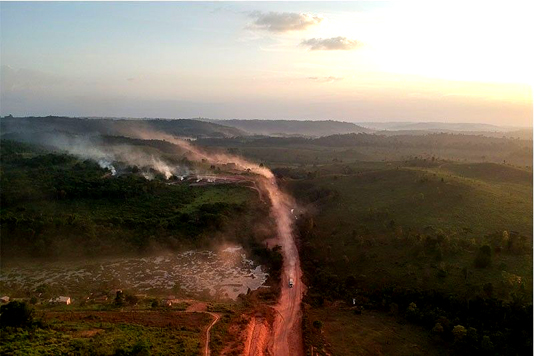 Fires recorded in the Brazilian Pantanal, a biodiversity sanctuary in the southern Amazon rain forest, have quadrupled in 2019 compared to the same period last year, the country’s space research agency said Thursday.The number of fires recorded by satellite since January in the Pantanal hit 4,515, an increase of 334 percent from the same period in 2018 where only 1,039 fires were recorded, the National Institute for Space Research (INPE) said.
The Pantanal, which is the world’s largest tropical wetland and located primarily in Brazil along with parts of neighboring Paraguay and Bolivia, is 80 percent flooded during the wet season from October to May.
That leaves the vegetation, which is particularly rich and diverse, vulnerable to fires during the summer dry season.
On Thursday, the fire-affected Brazilian state of Mato Grosso do Sul declared a state of emergency, which would allow the government to quickly release funds to fight the blazes.
The local government estimated more than one million hectares of its land had burned, most of them in the Pantanal.
Neighboring state Mato Grosso declared a similar state of emergency on Tuesday.
Experts say manmade deforestation is the main cause of the fires, though a decrease in precipitation and a recent heat wave together with strong winds re also factors.
The INPE has recorded 55,131 forest fires in the Amazon since the start of the year, a 43 percent increase compared to the same period in 2018. Most of these have been blamed on deforestation, reports AFP, Rio De Janeiro.