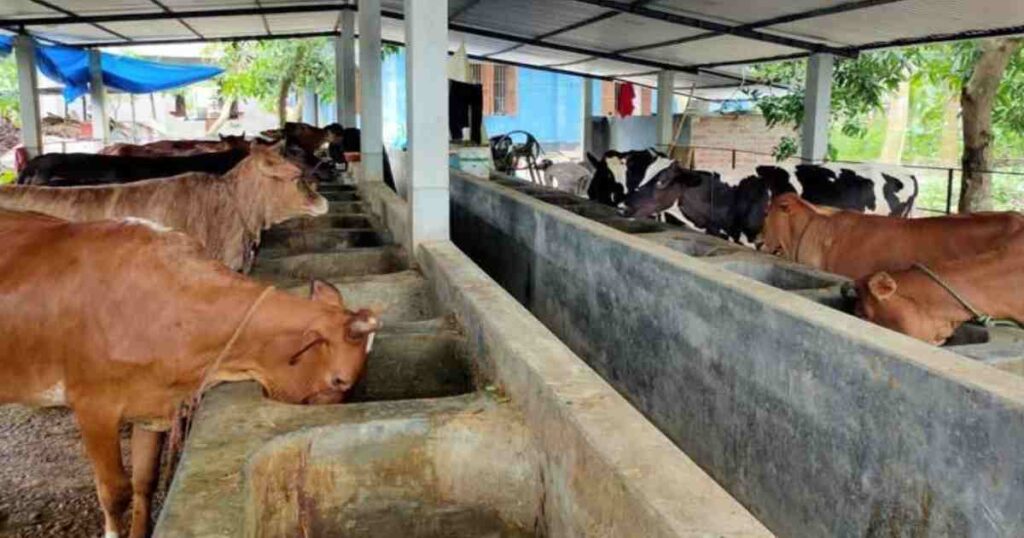 Jessore, Oct 04 – Nothing seems to be going right for the cattle farmers of Jassore’s Keshabpur upazila.
With earth filling by river dredging rendering the upazila’s soil unsuitable for growing paddy, most cattle farmers in the area have started selling their livestock for a paltry amount as it is becoming increasingly difficult for them to find fodder.

Moreover, whatever straw they had stockpiled for their livestock got wet in the recent monsoon rains. Also the costly paddy husk, wheat bran and mustard husk used as major feed for cattle are adding to their woes.
Babu, a local farmer, says, “It is becoming increasingly impossible for us to rear cattle due to the straw crisis. Many people are taking advantage of the crising and selling straw at high prices. Over a month, the prices have doubled. “
“Even the prices of dry food for cattle, including paddy husk, wheat bran and mustard husk have gone up. We are really struggling to survive. We hope the straw prices will come down in the Bangla months of Kartik and Agrahayon,” he adds.
A realty check by UNB has also revealed that paddy husks are being sold in Keshabpur at Tk 550-600 per sack (weighing 50 kg each) , wheat bran at Tk 1600 per sack (weighing 50 kg each) and mustard husk at Tk 200 per sack (weighing 25 kg), a substantial rise from the earlier Tk 450, Tk 1,500 and Tk 100 per sacks, respectively.
As a result, cattle farmers say they are letting their livestock go at throwaway prices in the local market. These days, the price of a cow has come down to Tk 45,000 from the eralierTk 65,000.
Dr Alokesh Kumar Sarkar, the upazila’s veterinary surgeon, acknowledges the hardships being endured by the cattle farmers. “There are 192 cattle farms in the upazila, with 90,000 livestock. Some 180 metric tonnes of straw are needed to meet the fodder demand.”
“Besides, 200 parcels of land have been brought under Napier grass cultivation from where 65,000 kg of grass is being sourced, but it is not serving the purpose as shortage remains.
However, the authorities concerned have provided training to some 1,200 farmers for growing grass,” he adds. – UNB