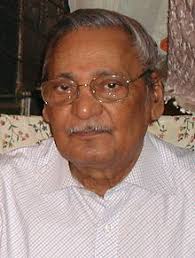 Dhaka, July 17 – Prof Emajuddin Ahmed, ex-vice chancellor of Dhaka University, died of cardiac arrest at a hospital in the capital on Friday morning. He was 87.He breathed his last around 5:30am at Labaid Specialized Hospital in the city’s Dhanmondi area, said his personal secretary Amar Chandra Mistry.
Emajuddin, a veteran political scientist, complained of chest pain around 2:30am at his Elephant Road residence. He was then taken to the Labaid Hospital, he said.
Amar said Emajuddin was feeling better after the admission, but he suffered a massive cardiac arrest in the early morning, and doctors later declared him dead.
He is survived by two son, two daughters and a host of relatives and well-wishers to mourn his death.
Emajuddin was the vice-chancellor of Dhaka University from 1992-96.- UNB