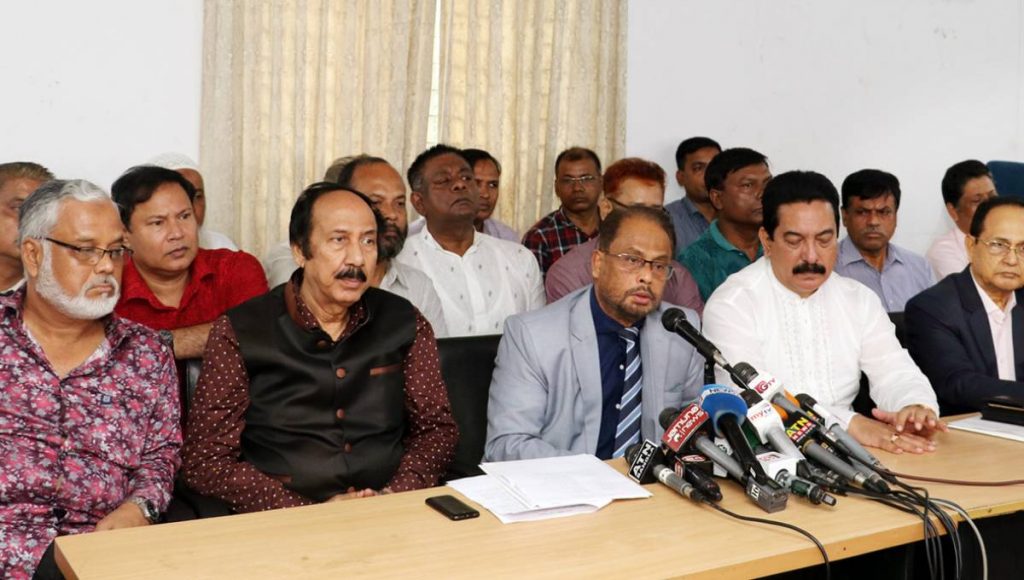 He also urged journalists to mention GM Quader as the Jatiya Party chairman.

Though some party presidium members were present at the press conference, Ershad’s wife and party senior cochairman Raushon Ershad were not seen there.

Speaking at the press conference, GM Quader said there is no conflict or division within their party. “All of the Jatiya Party leaders and activists are united. We’ll make the party stronger further with united efforts by turning our grief over the death of Palli Bondhu into strength.”

Replying to a question, GM Quader said their party will nominate its candidate for the by-polls to Ershad’s seat through discussions at the party forum following their party constitution.

Besides, he said, their party will also take decision through discussions about electing the Leader of the Opposition in Parliament.

Quader said an organisational team of Jatiya Party will soon initiate their activities across the country to strengthen the party further.

He said they will also hold a meeting immediately in memory of their late chairman HM Ershad.

Jatiya Party chairman and ex-president Hussain Muhammad Ershad who died on Sunday was laid to eternal rest on Tuesday at Polli Nibash in his hometown Rangpur where he was the most admirable political figure for over three decades.

In a dramatic move, the maverick former military strongman, known for frequently changing his decisions, Ershad reinstated his younger brother GM Quader as party chairman in his absence on April 6 and he did not change the decision before his death.

Earlier, Ershad had picked his brother to run the party in his absence on January 1 last and appointed Quader as the deputy leader of opposition three days later.

Amid strong resentment in the party on March 23, Ershad also removed Quader from the post of the deputy opposition leader, nominating his wife Raushon for the post.