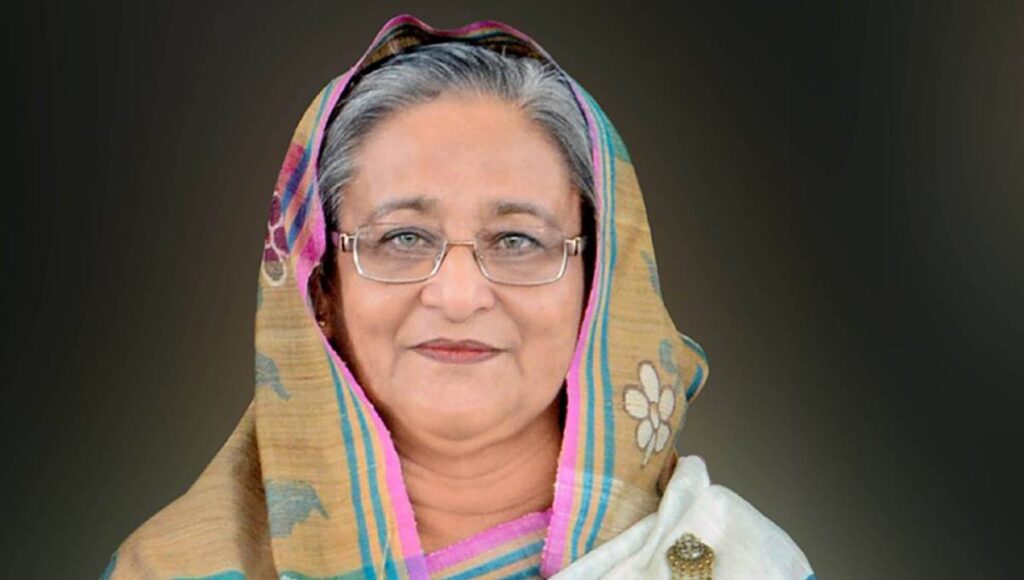 Prime Minister Sheikh Hasina on Tuesday said ensuring road safety is not the responsibility of the government or drivers alone as all will have to come up to deal with it.“Ensuring a safe road system is not only the responsibility of the government or the drives, it’s the responsibility of all–from pedestrians to all other citizens. All have to perform their own duties,” she said.
The Prime Minister said this while addressing a programme marking the National Road Safety Day-2019 at Krishibid Institution, Bangladesh (KIB) organised by the Road Transport and Highways Division.
This year’s theme of the day is ‘Jiboner Age JibikaNoy, SarakDurghatanaArNoy’ (Livelihood not ahead of life, no more road accident).
The Prime Minister asked all, especially the educated people, to obey traffic rules. “This is very much important.”
She said the awareness of pedestrians as well as that of drivers is very much important. “Our footpaths are always occupied… these have to be freed (from illegal occupants).”
Turning to illegal and indiscriminate car parking on roads, Sheikh Hasina said many shopping malls while taking approval from the authorities concerned show car-parking spaces in their designs, but they later sell those as shops.
“As a result, people have to park their cars in front of shopping malls and occupy roads,” she said.
The Prime Minister asked the traffic officials to be harsh against illegal car parking on roads and impose fine. “There should be parking spaces while the footpaths have to be freed for pedestrians.”
Hasina asked the authorities concerned to stop plying of unfit vehicles on roads. “They somehow make the vehicles fit to run and earn money…this type of attitude has to be changed.”
The Prime Minister also put emphasis on preventing bad competition on roads and uncontrolled speed of vehicles to end accidents.
She said development of road communications is very much important for developing a country.
“It’s possible to ensure the economic development of a region through ensuring the development of road communications, and keeping eye on that, we had given our attention to developing the communications system of the country.”
Hasina mentioned that the government is working to build a modern, safe transport network all over the country. “We’ve carried out a lot of developments in road infrastructures. We’re taking measures to ease people’s movement from one place to another by transports.”
She said some 446.70 kilometers of national highways have been upgraded to four lanes or above. At present, the upgradation of 149 kilometers of national highways into four lanes is underway.
The government has constructed 1,068 bridges and 4,656 culverts along with nine flyovers/overpasses. Eight underpasses have been constructed or renovated while the construction of 82 more bridges is underway, she said.
Sheikh Hasina said the first elevated Metro Rail of the country stretching from Uttara 3rd Phase to Motijheel is being implemented.
She also mentioned that 46.73-km long Dhaka Elevated Expressway is being constructed, while the construction of 20-km long Bus Rapid Transit stretching from Gazipur to Airport will be completed soon. “We’ve approved two new Metro Rail projects in an Ecnec meeting recently.”
Hasina asked the authorities concerned to take immediate and appropriate stern actions if anyone alters the size of trucks or other vehicles to carry extra goods or passengers.
Road Transport and Highways Division Minister ObaidulQuader, Parliamentary Standing Committee member on Road Transport and Bridges Ministry EkabbarHossain, MP, Chairman of NirapadSarak Chai IliasKanchan, Executive President of SarakParibahanSramik Federation Shahjahan Khan, MP Secretary General of SarakParibahan Malik SamityKhandakerEnayetUllah and Road Transport and Highways Division Secretary M Nazrul Islam also spoke on the occasion, reports UNB.