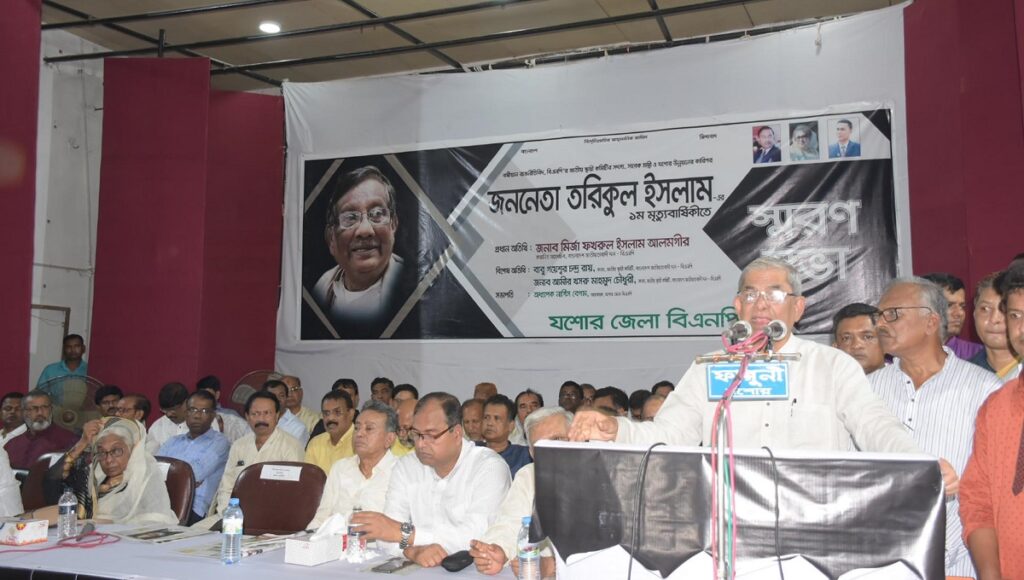 Jessore, Nov 4 – BNP Secretary General Mirza Fakhrul Islam Alamgir on Monday said launching a united movement to dislodge the current government is now a matter of time.“We must unseat the Awami League-led government and free our chairperson Khaleda Zia through a united movement. It’s now a matter of time to initiate such a movement,” he said.
Speaking at a discussion, the BNP leader further said, “I would like to say it clearly that the current government can’t stay in power for a long time…they (govt) are erased from people’s hearts. People are praying for getting rid of this regime. So, we’ve no time to look back.”
Jashore district unit BNP arranged the programme at Zila Parishad auditorium, marking the 1st death anniversary of BNP standing committee member and former minister Tariqul Islam.
Fakhrul said the success of their planned movement sure if they can only create a greater unity again. “BNP together with people must remove the heavy-stone of misrule this government has imposed on us.”
The BNP leader alleged that the entire state machinery has collapsed as the government politicised administration, law enforcement agencies and established its control over the judiciary. “Now there’s no justice and the rule of law in the country while people are unable to exercise their right to expression.”
Recalling Tariqul Islam’s contributions to the country and BNP, he said he was not only a leader of Jashore but also a political idol of Bangladesh and a guardian of BNP. “Tariqul had dedicated his life to the protection of independence and sovereignty of Bangladesh.”
“Our colleague Sadeque Hossain Khoka has also died. As if, the procession of death has begun as we’re losing our experienced leaders one after another due to oppression and repression by the current government,” the BNP leader bemoaned.
BNP standing committee members Gayeshwar Chandra Roy, Amir Khosru Mahmud Chowdhury, vice chairmen Barkatullah Bulu, M Shahjahan, Netai Roy Chowdhury and Shamsuzzaman Dudu, among others, addressed the programme with district unit BNP convener and Tariqul Islam’s wife Prof Nargis Begum in the chair.
Earlier in the day, Fakhrul along with party leaders and activists offered fateha at Tariqul’s grave.
Tariqul Islam Smriti Sangsad will arrange a discussion at the Jatiya Press Club on Tuesday on the occasion.
On November 4 last year, Tariqul died at Apollo Hospital in the capital at the age of 73. He was buried at Karbala graveyard in Jashore district town the following day. – UNB