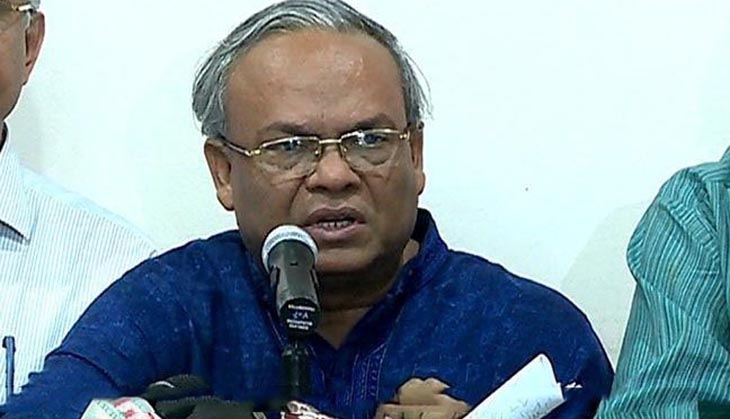 Dhaka, Dec 17 – BNP on Thursday accused the government of hiding accurate information about coronavirus cases and fatalities in the country.
“Coronavirus infections have increased at a geometric rate in the country. Several thousand people are getting infected every day with the virus and fighting for life without treatment,” said BNP senior joint secretary general Ruhul Kabir Rizvi.

Speaking at a press conference at BNP’s Nayapaltan central office, he said, “The government is revealing a small number of corona cases and deaths concealing the actual information.”
Rizvi said the Prime Minister and other ruling party leaders and ministers are giving various instructions staying safe in isolation, but common people are facing serious ordeals for lack of treatment, ventilators and oxygen facilities at the hospitals.
He said children are dying for lack of oxygen as there is no empty ICU bed anywhere, including in Dhaka. “Corona patients are not admitted to many hospitals. It seems that the government has no responsibility for people.”
The BNP leader said the government did not take effective steps like many other corona-hit countries to reopen educational institutions adopting a virtual class-policy or any other alternative way. “Most countries around the world have taken examinations for evaluating the merits of students.”
He said the government used to talk about its success of making Digital Bangladesh, but it has failed to use the digital technologies for continuing the studies of students.
“The government has adopted the auto-pass system without thinking of the future of crores of students,” the BNP leader observed.
Rizvi allege alleged that a group of criminals attacked the house of late Dhaka city mayor and freedom fighter Sadeque Hossain Khoka at Gopibagh in the capital early Wednesday.
He condemned the attack and demanded immediate arrest of those involved in the incident. – UNB