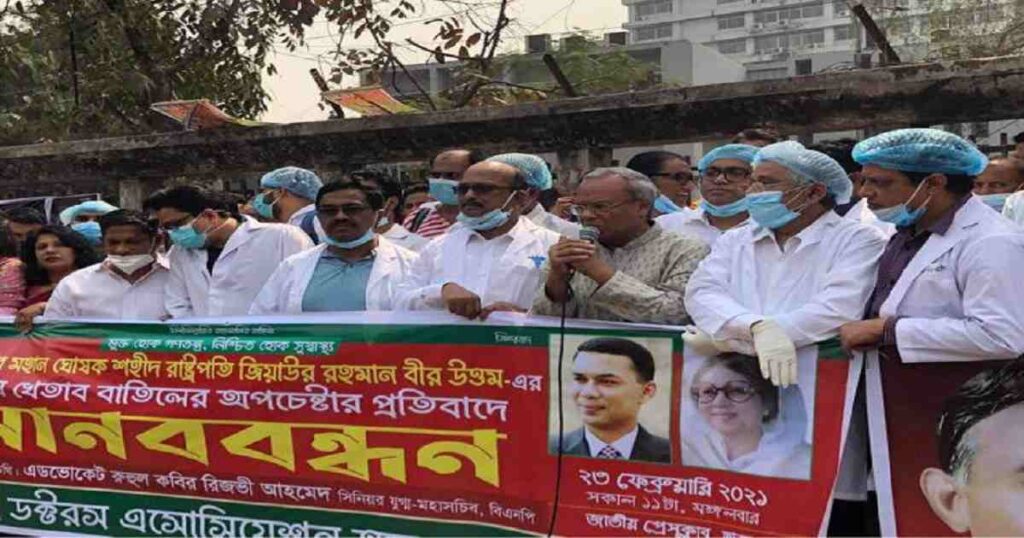 Dhaka, Feb 23 (UNB) :  BNP on Tuesday alleged that the government is making a list of ‘fake’ freedom fighters comprising Awami League supporters and their relatives who did not join the Liberation War in 1971.“Those who’re now in power didn’t fight the Liberation War. They didn’t see how the Liberation War took place in the battlefield. That’s why they want to snatch the title of real freedom fighters,” said BNP senior joint secretary general Ruhul Kabir Rizvi.
Speaking at a human-chain programme, he said, “They (govt) are making a list of fake freedom fighters comprising those belonging to Awami League.”
Referring to BNP senior leader and gallantry title recipient freedom fighter Hafizuddin Ahmed’s remark, Rizvi said only 80,000 freedom fighters had fought the Liberation War in 1971. “But Awami League is making the list of 2.5 lakh freedom fighters. They’re including the names of their relatives and grandchildren who were not born in 1971 in the list of freedom fighters.”
Doctors’ Association of Bangladesh (DAB) arranged the programme in front of the Jatiya Press Club protesting a move to revoke BNP founder Ziaur Rahman’s ‘Bir Uttam’ title.
Rizvi warned that those who are making ‘’evil efforts’ to snatch Zia’s Bir Uttam title will one day be tried in a ‘people’s court’.
He said he was utterly shocked seeing Al Jazeera’s recent report on Bangladesh. “Criminals have been pardoned by the state, but the law minister and the home minister said they don’t know anything about it. This is how the government is doing evil acts and injustice in the dark by introducing a mafia system,” the BNP leader alleged.
He said Awami League needs a mafia system to run the country as it has ‘obliterated’ democracy, freedom of expression and press freedom only to cling to power.
Rizvi said the government has taken a move to remove Zia’s gallantry title to divert people’s attention to a different direction from its ‘misdeeds’ exposed by the Al Jazeera report.
The BNP leader said it is the government, not Zia, will get humiliated if his Bir Uttam title is revoked. “Nothing will happen to Ziaur Rahman as he is a well-established heroic freedom fighter. By killing his own commander, he declared independence and inspired the whole nation to fight for independence.”