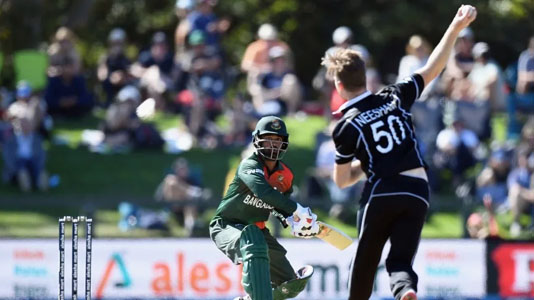 DHAKA -Bangladesh failed to avoid a whitewash after conceding a huge 164-run defeat at the hands of New Zealand in the third and final ODI at Basin Reserve in Wellington today.

The Tigers lost the first two ODIs by eight wickets and five wickets respectively. Electing to bat first, New Zealand put up a gigantic 318-6, thanks to maiden century from Devon Conway and Daryl Mitchell. Bangladesh however
showed another dismal batting performance to be all out for just 154 in 42.4 overs.

Conway led the charge in Kiwis batting, hitting 110 ball-126, that included 17 boundaries. Mitchell was not out on 100 off 92, clobbering nine fours and two sixes. The duo set up the platform of big total, putting on 169-run
partnership for the fifth wicket after Kiwis were in relatively tricky position with 120-4.

Other than the duo, no batsmen could carry on their start. Opener Martin Guptill scored 26 while Henry Nicholls made 18.

For Bangladesh, Rubel Hossain, who came back to the side replacing Saifuddin, claimed 3-70 while Taskin Ahmed, Mustafizur Rahman and Soumya Sarkar picked up one wicket apiece.

Bangladesh was demolished by firstly at the hands of Matt Henry, the new ball bowler who sliced the top order and then James Neesham appeared in the stage to clean up the tail. Henry snapped up 4-27 and Neesham snared 5-27,
sharing nine wickets between them to let Bangladesh down.

Only Mahmudullah Riyad could come up with some resistance. He struck an unbeaten 76 off 73 with six fours and four sixes, that actually propelled the side past 100, when Bangladesh was in danger to be wrapped up below hundred with 82-6.

They will however get another chance to end the win-draught when they take on the Kiwis in three-match T20 International series, starting on March 28 at Hamilton.BSS