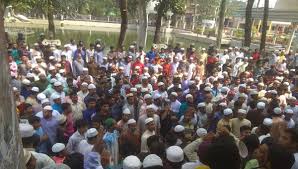 Dhaka – As part of its countrywide programme, Hefajat-e-Islam staged a demonstration in front of Baitul Mukarram National Mosque on Tuesday protesting the killing of four people in Sunday’s violence in Bhola’s Borhanuddin upazila following a blasphemous Facebook post from a hacked account.

Several thousand supporters of Hefajat gathered at the south gate of the national mosque after Zohr prayers and held a rally there for over an hour, disrupting vehicular movement from Paltan to Dainik Bangla crossings.

He demanded the government enact a law keeping the provision of death sentence for any derogatory remark about Islam and Prophet Muhammad (PBUH).

Kasemi also demanded a judicial investigation into the Bhola incident alongside ensuring proper compensation for the family members of those killed and free medical treatment of those injured in the incident.

He also said the government must withdraw Bhola Police Super and the officer-in-charge of Borhanuddin Police Station.

The Hefajat leader also demanded that the International Society for Krishna Consciousness (ISKCON) be banned.

On Monday, Hefajat secretary general Allama Junayed Babunagari announced the programme at a press conference at its headquarters at Hathazari Madrasah.

Four people were killed and about 200 others injured on Sunday in a clash between police and demonstrating locals in Borhanuddin upazila, demanding the punishment of a youth for allegedly hurting religious sentiments on Facebook.