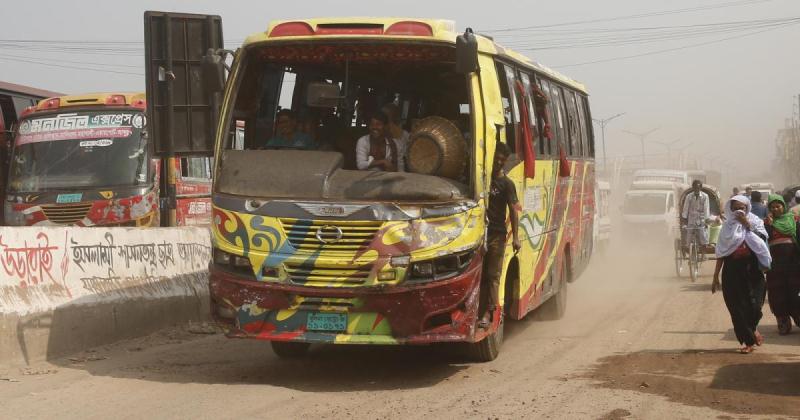 Dhaka, Feb 16 – In a major development, the High Court on Sunday directed the govt to form taskforces in all districts to stop unregistered and unfit vehicles from plying on roads across the country. While hearing on a suo moto rule, the HC bench comprising Justice Md Nazrul Islam Talukder and Justice KM Hafizul Alam directed the secretaries to the public administration, home and roads and bridges ministries to take appropriate legal action including seizing, stopping and dumping of unfit and unregistered vehicles.
The HC bench asked the government to form the task force headed by the deputy commissioner in line with the Road Transport Act 2018 in order to bring discipline into the roads.
The HC bench said that the task force will work in cooperation with police, executive magistrates and BRTA officials.
It also directed the government to submit separate reports after complying with the directives in the next three months.
The HC bench fixed June 1 for passing further order over the matter.
After the HC order, Deputy Attorney General AKM Aminuddin Manik told reporters said the taskforce would form comprising of the deputy commissioner, concerned executive magistrate and representatives from Road Transport Department and police for taking necessary action against unregistered and unfit vehicles.
Earlier, on February 12, Bangladesh Road Transport Authority (BRTA) in a report submitted before the HC stated that only 165,764 vehicles out of the 458,369 unfit vehicles in the country had renewed their fitness certificates until December 31 last year.
The HC bench asked BRTA for information on how many unfit vehicles were still operating on the roads without valid documents and fitness certificates.
It ordered BRTA and inspector general of police (IGP) to inform the HC about the action taken against unfit vehicles by February 16.
In its report, BRTA stated that only 165,764 vehicles out of a total of 458,359 had renewed their fitness certificates across the country. That means 292,595 vehicles had been operating on the roads without valid fitness documents till December 30 last year. The IGP in his report mentioned that the police had taken steps to prohibit unfit vehicles from collecting fuel and gas.
The report said that the police issued notices instructing the owners of filling stations across the country not to sell oil and gas to unfit vehicles.
On October 23 last year, the same HC bench directed the authorities to stop selling oil and gas to unfit vehicles until their fitness certificates were renewed. It asked the authorities to take steps so that vehicles which lacked valid fitness documents could not source fuel from any filling station in the country. It also gave the owners of such vehicles two more months to collect their renewed fitness certificates.
The HC bench issued the order after receiving a BRTA report which stated that only 89,269 out of 458,369 unfit vehicles had renewed their fitness certificates within the two months from August 1 to September 30, 2019. On July 23 last year, the HC had directed defaulter vehicle owners to collect their fitness certificates from BRTA between August 1 and September 30, 2019. The court had warned that if any owner failed to collect the fitness certificates by the stipulated time, their vehicles would not be allowed to ply on the roads.
On June 24 last year, the same HC bench ordered BRTA to submit a detailed district-wise list of vehicles without fitness certificates, drivers without renewed licences, and the names of such vehicle owners within one month.
The HC bench had issued a rule on March 27 last year following a report published on March 23 under the headline “No fitness docs, yet running.
Barrister Moyeen Firozee and Rafiul Islam appeared for the BRTA, while deputy attorney general AKM Amin Uddin Manik represented the state during yesterday’s proceedings. – Staff Reporter