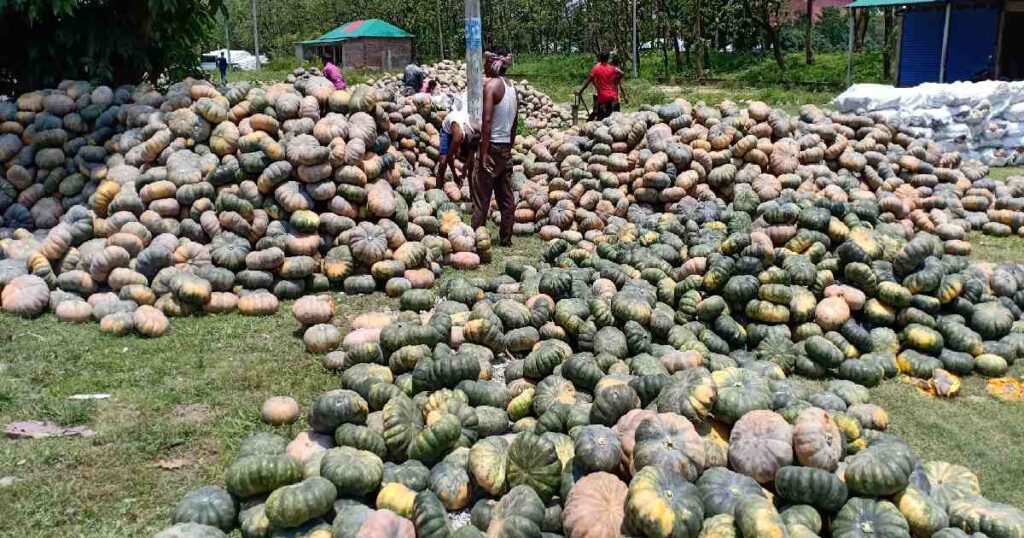 Thakurgaon, July 06 – Despite bumper yield of sweet pumpkins, farmers in Thakurgaon are counting losses as high transport costs are preventing them from marketing their produces all over the country, forcing some of them to sell at low prices in the local market. According to the farmers of the district, sweet pumpkin cultivation has been extensive in Thakurgaon district this time. Production has also been bumper.
But due to rising transport costs, thousands of sweet pumpkins are piled up on the side of the fields and even on the side of the road and farmers and traders are waiting in the hope that affordable trucks will be available to transport their sweet pumpkins, said the farmers with frustration.
Deputy Director of Thakurgaon District Agriculture Extension Department (DAE), Aftab Hossain said sweet pumpkins have been cultivated in 1,200 hectares in the district this time.
Besides, production has been recorded at 24,000 tons which is the highest in the country, said the official.
He said transportation costs have doubled, so now the pumpkins are being sold at Tk 3/4 per kg in the district itself. Selling at this price will not benefit the farmer.
However, he said that sweet pumpkins do not rot easily, can be stored. So if special trains could be arranged for transporting pumpkins, the transportation problem would be solved and they could be sold in the more lucrative markets of the capital and elsewhere.
In order to aid farmers, the district administration has added one sweet pumpkin to each relief package during the corona situation. – UNB