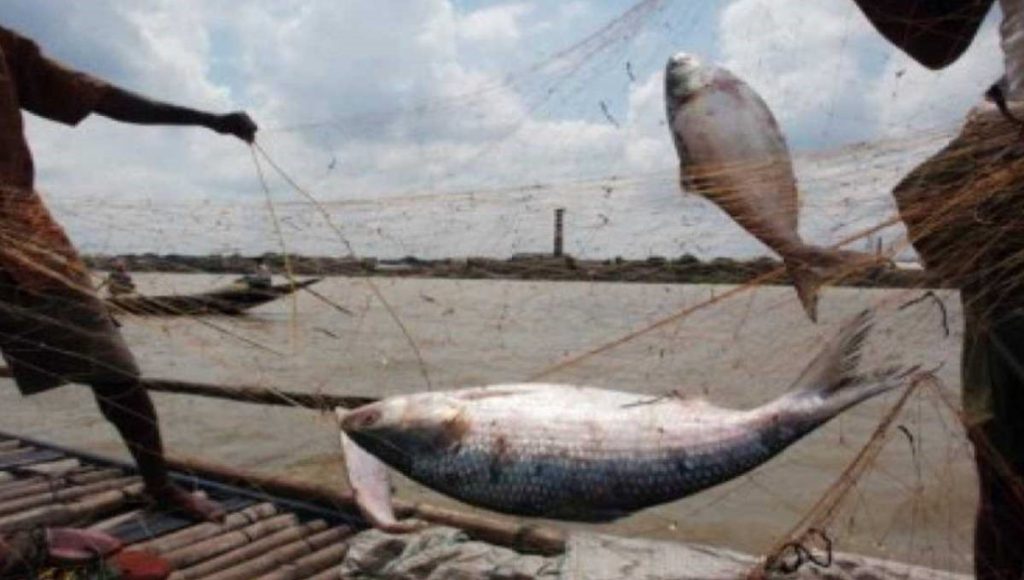 Dhaka, Oct 06 – The government has imposed a 22-day ban on catching, selling and transporting Hilsa (popularly known as ilish) to ensure safe spawning of the fish, during its peak breeding period in a 7,000km breeding ground starting from October 9 and continued to October 30.The department of fisheries yesterday issued a circular signed by its director general Quazi Shams Afroz.
According to the circular, 48 fisheries officers have been given responsibility to ensure safe spawning of the hilsa fish within the banning period and they will monitor so that fishermen won’t able to catch fish during the banning period.
A total of 3,95,709 fishermen are involved in catching hilsa fish in 112 upazila under 29 districts across the country.
During the hilsa breeding period, a massive combined operation will be conducted at all the fisheries ghats, warehouses, and hat-bazars across the country, Dr Sainar Alam, district fisheries officer told this correspondent.
Besides, each fisherman’s family will receive 20kg of rice from the government, under its vulnerable group feeding (VGF) program during the banning period for 22-day, disaster management and relief ministry sources said.
Hilsa production in Bangladesh has gone up by 159.76% in the last 15 years due to the government’s efforts, including their ban on catching brood fish, and fries.
Production of hilsa stood at 517,000 tonnes in 2017-18 fiscal years, up from 199,000 tonnes in 2002-03 fiscal years.
The hilsa production was 496,000 tonnes in 2016-17 fiscal years.
The estimated market value of the 517,000 tonnes of hilsa stands at Tk20,000 crore, calculated at Tk400 per kg this year.
Total production is expected to surpass 550,000 tonnes within five years, fisheries department sources said.
In order to ensure the safe reproduction of hilsa, the fisheries department has been imposing bans, since 2003, on catching hilsa during the Bangla month of Ashwin to Kartik. The ban is imposed under the Protection and Conservation of Fish Act 1950.
Any breach of the ban will result in one to two years of imprisonment and a maximum fine of Tk 5,000.
The fisheries department, navy, air force, coast guard, police, river police, Rapid Action Battalion (RAB), Border Guard Bangladesh (BGB), district and Upazila administrations, including the Fisheries and Livestock Ministry, will enforce the ban. – Staff Reporter