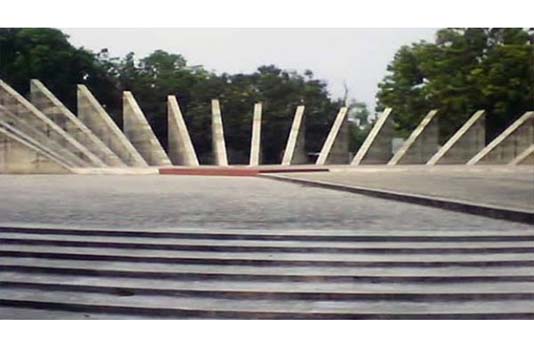 The historic Mujibnagar Day will be observed on Friday marking the oath-taking ceremony of country’s first government on April 17, 1971.President M Abdul Hamid and Prime Minister Sheikh Hasina issued separate messages on the eve of the day recalling the historic event.
In his message, President Hamid said April 17 is a memorable day in the long battle for independence of the Bangalee nation.
He recalled with profound respect the greatest Bangalee of all time, great architect of independence Father of the Nation Bangabandhu Sheikh Mujibur Rahman, four national leaders — Syed Nazrul Islam, Tajuddin Ahmed, Captain M Mansur Ali and AHM Qamruzzaman — under whose strong leadership in administering the Mujibnagar government, the country’s great independence was achieved through nine-month bloody Liberation War.
The President also recalled with deep respect the three million valiant freedom fighters who laid down their lives in the 1971 Liberation War, war heroines, martyred intellectuals and the people of all strata who joined and extended support to the war.
He expressed his optimism that through observance of the Mujibnagar Day, the new generation would be able to know the country’s true history and will be encouraged to contribute to build a ‘Sonar Bangla’ as dreamt by Bangabandhu.
In her message, Prime Minister Sheikh Hasina said the first government of the independent Bangladesh had taken oath at Baidhyanathtala in Meherpur along with endorsing the proclamation of the independence.
From that day, the historic place was recognized as ‘Mujibnagar’, she added.
She urged the countrymen to be imbued with the inspiration of Mujibnagar Day to make their efforts in building a poverty and hunger free and prosperous and happy Sonar Bangla.
On the eve of the day, Awami League General Secretary Obaidul Quader today urged the party men and the people to observe the historic Mujibnagar Day staying at homes.
On the occasion of the Mujibnagar Day, Quader, in a statement, showed his respect and gratefulness to the doctors, nurses and health professionals working from the frontline to contain the global coronavirus pandemic.
In the wake of novel coronavirus outbreak that has already claimed 60 lives in Bangladesh and over 1,38,000 across the globe, the ruling Awami League (AL) earlier cancelled all programmes of the day.
Different government and non-government organisations also cancelled their programmes. Marking the day, important government establishments are illuminated but this year such events were cancelled.
Newspapers will publish special supplements while Bangladesh Betar and Bangladesh Television and private TV channels will air different programmes highlighting significance of the day.
Following the Pakistan army’s genocide on unarmed Bangalees started on the black night of March 25 in 1971, senior leaders of Awami League assembled at Baidyanathtala in Meherpur on April 17 to form the provisional government of independent Bangladesh.
Baidyanathtala, mainly a mango orchard, was later named Mujibnagar after ceremonial formation of the provisional government of Bangladesh.
Bangabandhu Sheikh Mujibur Rahman was declared the first president of the People’s Republic of Bangladesh, while Syed Nazrul Islam was appointed the acting president in the absence of Bangabandhu.
Tajuddin Ahmed was appointed as the first prime minister, while Khondoker Moshtaque Ahmed, Capt M Mansur Ali and AHM Qamaruzzaman were named as cabinet members.
The interim government named General MAG Osmani as Commander-in-Chief of Mukti Bahini while appointed Major General Abdur Rob as chief of staff.
The provisional government gave successful leadership to the War of Liberation for achieving victory on December 16