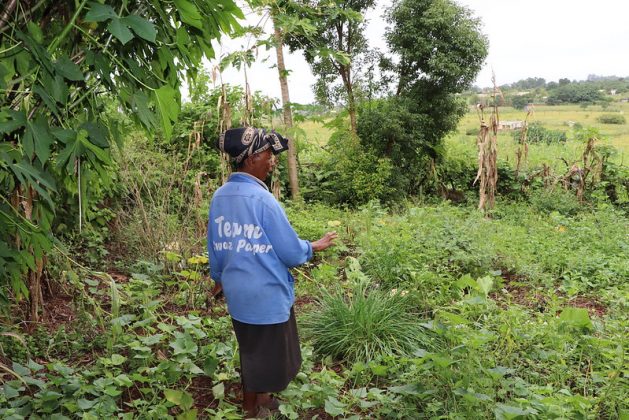 By Mantoe Phakathi
MALKERNS, Eswatini, Apr 28 2020 (IPS) – Nobukhosi Cebekhulu (68) and Khetsiwe Tofile (64) are small-scale vegetable farmers who are producing from their permaculture home gardens in Malkerns, Eswatini. Proud that they are able to make a small contribution towards a healthy nation during the COVID19 pandemic, both women say they are happy that they can still continue to produce and sell vegetables without leaving their homes.
IPS found them waiting for transport outside Tofile’s home with basins of lettuce to be collected by the Guba Permaculture Training Centre.
“We don’t go to the shop to buy inputs but we use seedlings that we produce and share among ourselves,” Cebekhulu told IPS adding: “Our produce is collected from our homes and taken to the market.”
Eswatini’s nutritional challenges
According to Guba director, Sam Hodgson, the year-long permaculture adult training programme is a response to the nutrition and poverty challenges in Eswatini.
Although 20 percent of Eswatini’s rural population experienced severe and acute food insecurity according to the 2019 Vulnerability Assessment Committee Report, the country is making progress in meeting its nutritional needs. According to Musa Dlamini, the monitoring and evaluation officer at Eswatini Nutrition Council, children under five years old with stunting stands at 25.5 percent.
“This is still high because we have to be less than 20 percent in terms of the WHO [World Health Organisation] standards,” Dlamini told IPS. “We’ve made progress though because the figure dropped from around 30 percent in previous years.”
In the same age group, children with wasting are at about 2 percent and underweights are at 5 percent, which is acceptable in terms of WHO standards.
“We use children under 5 to measure nutrition in the country,” said Dlamini.
He said COVID19 might reverse progress though following the fact that people might lose their source of income during the partial lockdown period. Already, 63 percent of the total population of 1.3 million are poor, according to the United Nations World Food Programme.
Guba participants spend two to three days a month at the centre after which they apply what they have learnt at their homes. They acquire skills to harvest water, make compost, mulching, plant perennial species of trees and design their production cycle according to the four seasons.
“We encourage the farmers to use material that they already have at home,” Hodgson told IPS. “That’s why we don’t expect them to buy new fencing material or tools. We’re adding value to the agriculture they’re already practising.”
Adapting to climate change
Hodgson said this programme is helping farmers acquire skills to cope with erratic rainfall as an adaptation strategy to climate change.
According to Dr. Deepa Pullanikkatil, a consultant based at the Coordinating Assembly of NGOs (CANGO) and co-director at Sustainable Futures in Africa, permaculture helps farmers to adapt to changing climate using sustainable farming practises which mimic nature.
“The practice produces healthy organic crops which can improve their incomes thereby enhancing their adaptive capacity,” Pullanikkatil told IPS.
She said, in permaculture, farmers harvest and conserve water, which is an adaptation strategy particularly because the country is experiencing erratic rainfall patterns due to climate change. Farmers also use low or no tillage methods and composting which are all great for soil fertility. Low tillage frees up time and it is less costly than hiring labour or tractors.
“This also has co-benefits to climate mitigation because of permanent crops, trees grown in the farm and low tillage practices contribute to carbon sequestration,” she said.
Garden farming equates healthy nutrition
Guba also supports the farmers with eating habits that promote a healthy lifestyle such as cooking that retains nutrients and adjusting the composition of the plate according to the right amount of starch, protein and vegetables.
The Barilla Centre for Food and Nutrition (BCFN) also promotes healthy and sustainable dietary patterns and sustainable ways of producing food. According to the Food Sustainability Index, created by the BCFN and the Economist Intelligence Unit (EIU), sub-Saharan Africa is home to the world’s hungriest populations. It also states that when it comes to countries addressing nutritional challenges “best practices might be found in smart regulation, whether that means educating consumers on healthy eating, discouraging unhealthy consumption patterns or requiring foods to contain certain vitamins and minerals”.
“What we’ve learnt about our farmers is that after participating in our programme, they visit the clinic less often because of the health benefits from the food they eat and how they eat it,” said Hodgson.
From garden to market
Guba also realised that one of the farmers’ challenges was money to pay school fees for their children and cater for other needs. Therefore, the centre decided to train some of the interested farmers to produce for the market. Hodgson described Guba as “an ethical middle-man” that supports the farmers to produce high-quality organic vegetables and sells it on their behalf to surrounding restaurants.
“We collect, repack and deliver,” said Hodgson. “This area (Malkerns) has a large middle-class population and many restaurants who buy the fresh produce that is delivered on the same day of harvest.”
This project earned about $1,100 from the sale of vegetables. Each farmer makes about $200 per month.
During the COVID-19 partial lockdown, which the Government introduced in March, all Guba restaurant customers had to close overnight. In response to this sudden loss of market, Guba opened a farm stall at the centre.
“After four weeks of operating the farm stall, three days a week. We’re doing well. Sales are increasing and customer feedback is very positive,” said Hodgson.
This means Guba continues to buy produce from the farmers even during the COVID19 period thus keeping their income stream open and, at the same time, supplying fresh produce to the local community.