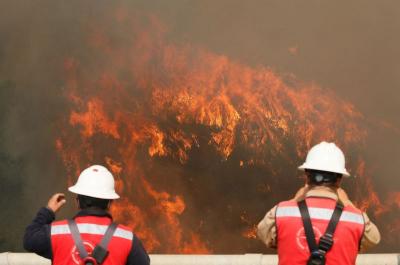 A wildfire ravaged woods and burned 100 homes in the hilly Chilean port city of Valparaiso, where authorities evacuated hundreds of people on Monday.

At least 19 people were reported hurt after the fire broke out on the outskirts of the historic port city, the government said.

Hundreds of firefighters along with water-dumping airplanes and helicopters were battling the blaze, officials said.

“Emergency protocol have been activated,” the country’s President Michelle Bachelet said on Twitter. She expressed “solidarity with the people affected.”

The flames had “damaged 100 homes in an area where there are 500,” deputy interior minister Mahmud Aleuy told a news conference late Monday.

He said 19 people had been hurt, mostly by breathing in smoke, but “fortunately there are no (mortal) victims.”

The flames destroyed 50 hectares (123 acres) of woodland, the National Emergencies Office said in a statement.

Fanned by strong winds in hot summer weather, the fire broke out in the hilly region that makes Valparaiso a picturesque tourist destination.

Some 200 people were evacuated from their homes as a precaution, the agency added.

Electricity providers said they had cut power to nearly 48,000 customers also as a precaution.

Laguna Verde lies on the southern outskirts of Valparaiso, a sprawling city built on 40 hills with stunning sea views.

Dubbed the “jewel of the Pacific,” the picturesque colonial city is a UNESCO World Heritage Site.

Thousands of tourists come every year to stroll its narrow cobbled streets and ride cable cars up the steep hills.

Wildfires killed 15 people in 2014 and destroyed thousands of homes in the area, particularly in the city’s poorer neighborhoods.

The wooden structures with their tin roofs, perched on tinder-dry hillsides, were quickly engulfed in that fire.

More blazes in March 2015 killed one woman and forced thousands of people from their homes.

The city is home to 270,000 people overall, many living in brightly colored houses on the hillsides.

In its heyday from the mid-19th century to the early 20th, Valparaiso became famous as a stopover point for ships steaming down to the continent’s southern tip and on to the Atlantic.

The opening of the Panama Canal in 1914 prompted a spectacular drop in traffic to Valparaiso and an end to the port’s glory days.

It now relies heavily on tourism, and living standards are lower than the average in Chile, reports AFP, Valparaiso, Chile.