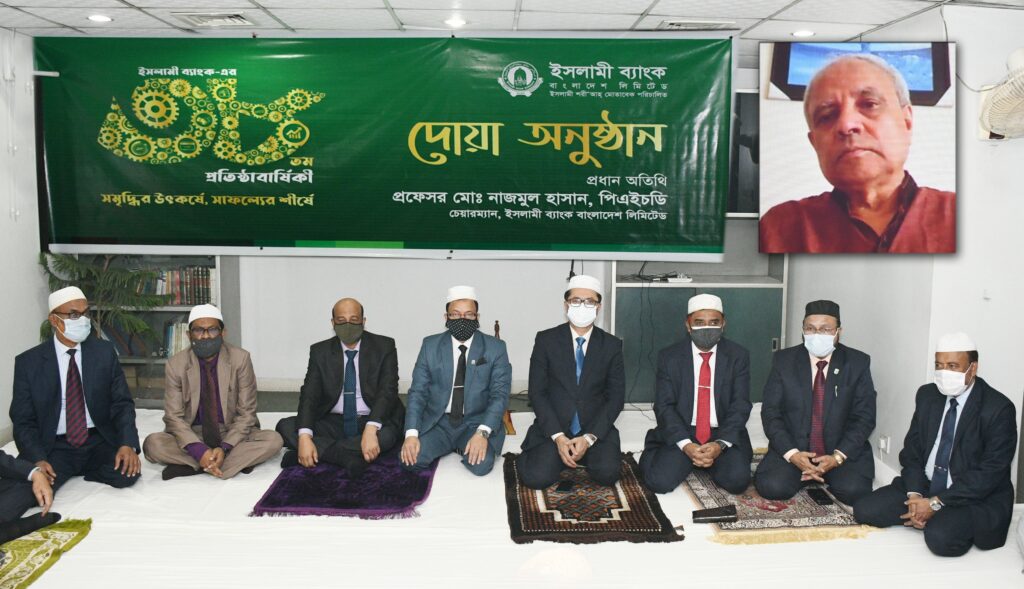 Islami Bank Bangladesh Limited organised a Doa program on the occasion of its 38th founding anniversary on 31 March 2021, Wednesday at Islami Bank Tower. Prof. Md. Nazmul Hassan, PhD, Chairman of the Bank addressed the function on a virtual platform as Chief Guest. Presided over by Mohammed Monirul Moula, Managing Director and CEO of the Bank, the program was attended by Muhammad Qaisar Ali and Md. Omar Faruk Khan, Additional Managing Directors, Abu Reza Md. Yeahia, Taher Ahmad Chowdhury, A.A.M. Habibur Rahman &amp; Md. Mosharraf Hossain, Deputy Managing Directors, Executives and officials of Head office. Prayers were offered for the overall progress of the bank, well being of all the Directors, executives, officers, employees, clients-well wishers and the safety of the country people from the Corona pandemic.
Prof. Md. Nazmul Hassan, PhD, in his speech as the chief guest said that Islami Bank was established with a motto of conducting Shariah based banking activities. The bank has been able to achieve the glory of being the best bank in the country by conducting welfare oriented banking activities for the last 38 years. Islamic banking is a great achievement of Bangladesh economy after independence. He said, a large segment of clients in the banking sector are out of Islamic Banking services, we have to address them. He added that Islami Bank has been able to come to its present position with the honesty, sincerity and devotion of the officers and employees of this bank and the unwavering cooperation of the people. The bank has been playing an important role in alleviating poverty by conducting asset-based and welfare-oriented investment activities besides creating large industrial groups, as well as building savings habits among the poor people in rural areas. The bank has been working to move the country&#39;s economy forward and strengthening the economic base by creating entrepreneurs. He called upon the officials to popularize the Alternate Delivery Channel products like Cellfin, mCash and Internet banking amid the Corona pandemic.
Speaking on the occasion, Mohammed Munirul Moula remembered the sponsors, directors, executives and employees who paid devotion to the Bank in the previous days. He said, Islamic banking is a successful reality now in Bangladesh. Islami Bank has become the top bank in the country in all activities including import, export and remittance services. He mentioned that Islami Bank has been making a significant contribution in procuring readymade garments and remittances, two of the driving forces of the country&#39;s development. He called upon the officials to work for asset quality development and attaining international standard in modern tech-based banking. – Press release