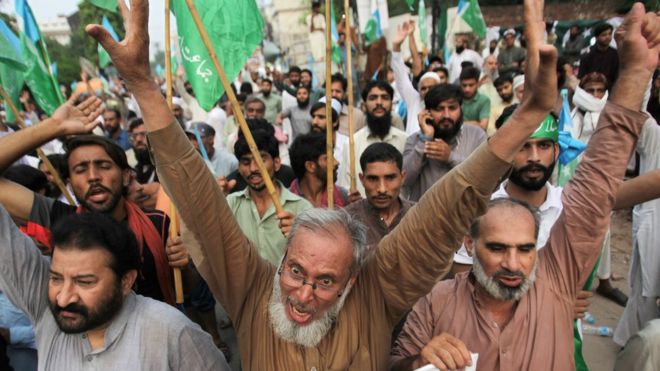 Pakistani PM Imran Khan has vowed to fight India’s decision to revoke Indian-administered Kashmir’s autonomy, including at the UN Security Council.Mr Khan said the move was in breach of international law, adding that he feared ethnic cleansing by India.
The region remains locked down, a day after India announced the move.
The Himalayan region of Kashmir is claimed in its entirety by both India and Pakistan, but each country controls only part of it.
There is a long-running separatist insurgency on the Indian side, which has led to thousands of deaths over three decades. India accuses Pakistan of supporting insurgents – an accusation Pakistan denies, saying it gives only moral and diplomatic support to Kashmiris who want self-determination.
What did Mr Khan say?
The Pakistani prime minister said he wanted to “tell the world” about the decision announced by the Indian government on Monday.
“Through the United Nations Security Council, we are studying it now, we will raise it in General Assembly, we will talk to heads of States at every forum… we will raise it in the media and tell the world,” he told parliament on Tuesday.
Mr Khan said he thought the removal of special status would allow India to change the demographic make-up of the Muslim-majority state.
“I am afraid that [India] will now carry out ethnic cleansing in Kashmir,” he said.
“They will try to remove the local people and bring in others and make them a majority, so that the locals become nothing but slaves.”
Earlier, Pakistan’s powerful army chief said his troops stood by Kashmiris in their “just struggle”.
Neighbouring China has also voiced opposition to the Indian move, describing it as “unacceptable”.
What’s happening on the ground?
A telecoms and media blackout in Indian-administered Kashmir, combined with a curfew, is being enforced amid concern that the government’s decision to revoke autonomy could trigger large-scale protests by people already unhappy with Indian rule.
The BBC’s Aamir Peerzada in Srinagar, who managed to access one of the few working landlines in the state, said there was a palpable sense of anger and betrayal among people he had spoken to.
Instances of protest and stone-throwing were reported and local leaders have been detained. Kashmiris in other parts of the country said that they were unable to get through to their families.
Tens of thousands of additional troops were deployed ahead of the government’s announcement on Monday, in what was already one of the world’s most militarised zones, and more troops have been sent since.
How has Kashmir’s status changed?
For many people in Indian-administered Kashmir, Article 370 – as the law guaranteeing special status was known – was the main justification for being a part of India. By revoking it, the Bharatiya Janata Party-led government has irrevocably changed Delhi’s relationship with the region.
The article allowed the the Indian state of Jammu and Kashmir a certain amount of autonomy – its own constitution, a separate flag and the freedom to make laws, though foreign affairs, defence and communications remained the preserve of the central government.
It could make its own rules relating to permanent residency, ownership of property and fundamental rights. It could also bar Indians from outside the state from purchasing property or settling there.
The government said Article 370 needed to be scrapped to put the state on the same footing as the rest of India.
But many Kashmiris believe that the BJP ultimately wants to change the demographic character of the Muslim-majority region by allowing non-Kashmiris to buy land there.
What’s happening in India’s parliament?
The revocation of special status was debated in parliament during the introduction of a bill relating to the division of Jammu and Kashmir into two distinct regions.
The bill – which seeks to split the state into two union territories, Jammu and Kashmir, and Ladakh – was passed by both houses of parliament.
Union territories have less autonomy from the federal government than states do.
Before it was passed, the bill drew sharp criticism from opposition MPs. Lawmakers from the south, such as those from the DMK party, expressed concern about what they saw as weakening of India’s federalism.
They accused the government of “denying the will of the people” of Kashmir since the decision to revoke Article 370 was taken without consulting the state’s lawmakers.
But the opposition is also divided. Several parties, including Delhi’s AAP, have backed the decision to revoke Article 370 and bifurcate the state. – BBC