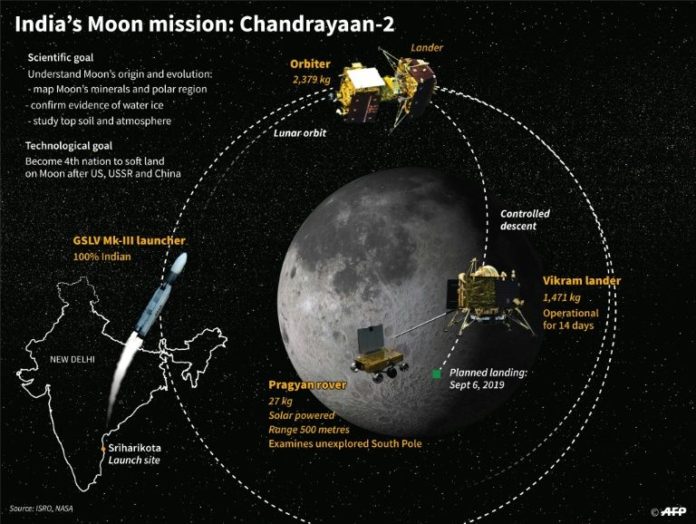 India today  dramatically scrapped the launch of a rocket that was aiming to land a probe on the Moon less than one hour before blast-off because of a “technical” problem.
India wants the Chandrayaan-2 — or Moon Chariot 2 — mission to make it only the fourth country after Russia, the United States and China to land a craft on the lunar surface.
Countdown at the Satish Dhawan Space Centre was halted 56 minutes and 24seconds before the planned liftoff at 2:51 am (2121 GMT Sunday).
“A technical snag was observed in launch vehicle system at T-56 minute,”the India Space Research Organisation (ISRO) said on Twitter.
“As a measure of abundant precaution, #Chandrayaan2 launch has been called off for today. Revised launch date will be announced later.”
Officials at the space centre on an island off the coast of Andhra Pradesh state said the problem was in the launch vehicle system.
ISRO had announced one hour before launch that the filling of liquid hydrogen fuel had been completed.
The agency did not say when a new launch could be held.
Attention on the Indian mission had increased as the launch was to be carried out just five days before the 50th anniversary of American Neil Armstrong’s history-changing walk on the Moon.
India had spent about $140 million on preparations for Chandrayaan-2 and had hailed the mission as one of the cheapest ever.
A landing on the Moon had been scheduled for September 6.
By comparison, the United States spent about $25 billion — the equivalent of more than $100 billion in current prices — on 15 Apollo missions in the 1960s and 70s.
Almost all of Chandrayaan-2’s orbiter, lander and rover were designed and made in India.
India had prepared its most powerful rocket, the GSLV Mk III, to carry the 2.4-tonne orbiter. The orbiter was to keep circling the Moon for about one year taking pictures of the surface and sending back information on the atmosphere.
The orbiter was to carry the 1.4-tonne lander Vikram — which in turn was to take the 27-kilogramme (60-pound) rover Pragyan — to a high plain between two craters on the lunar South Pole.
The solar-powered rover can travel up to 500 metres (yards) and was expected to keep sending back images and data for one lunar day, the equivalent of 14 Earth days. Pragyan will be looking for signs of water and analyse lunar rocks and soil.
India’s first lunar mission in 2008 — Chandrayaan-1 — did not land on the Moon, but carried out a search for water using radars.
A soft landing on the Moon would be a huge leap forward in India’s space programme. National pride is at stake as Prime Minister Narendra Modi has
vowed that a manned mission into space will be launched by 2022.
India also has ambitions to land a probe on Mars. In 2014, India became only the fourth nation to put a satellite into orbit around the Red Planet, reports AFP, Sriharikota, India.