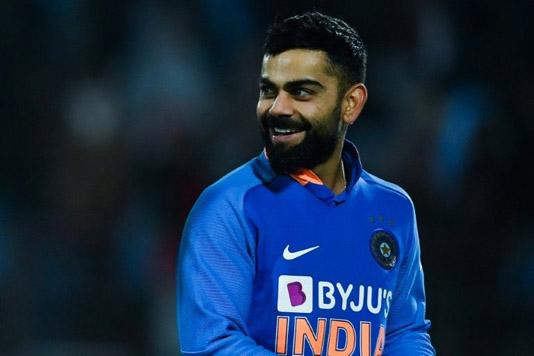 India’s one-day side have learned to be tougher when they lose the toss following the heartbreak of a World Cup semi-final defeat, said captain Virat Kohli said after winning the one-day series against Australia.Kohli lost all three tosses to Australia’s Aaron Finch but the hosts bounced back from a 10-wicket hammering in the opener to clinch the series 2-1 on Sunday. India comfortably defended 340 in the second match and chased down 287 in the decider.
Kohli said the World Cup semi-final loss to New Zealand last year after losing the toss and failing to chase down a moderate target had made had them stronger.
“We spoke after the World Cup the way we exited, you can’t always look for a situation that should go your way at the toss,” Kohli told reporters.
“We’ve literally taken the toss out of context, and we’re as prepared as possible to do something the opposition asks us to do.
“The last six or eight months have been a revelation and the younger guys stepping up is a very good sign for Indian cricket.”
India were due to fly to New Zealand later Monday for a tour that will start with the first of five Twenty20 internationals in Auckland on Friday. They will be followed by three one-day internationals and two Tests.
Kohli said the team would be confident after a 4-1 ODI series win in New Zealand a year ago.
– Perfect tonic –
“We were very positive in how we played, very sure of what we wanted to do,” said Kohli.
“The thing about playing away is if you’re able to put the home team under pressure, you can enjoy your cricket.
“That’s what we did last year, squeezed them in the middle overs, picked up wickets, the spinners were outstanding.”
Kohli said the two wins over Australia had been a perfect tonic after being criticised for the heavy defeat in the first game.
“The last two games were tough wins, it boosts your confidence which we’re carrying forward,” said Kohli.
Australia skipper Aaron Finch said India had been “exceptional” and praised man-of-the series Kohli, who hit 79 and 89 respectively in the second and third matches, and prolific opener Rohit Sharma, who made 119 in the decider.
“They’ve got Virat who is probably the greatest ODI player of all-time, and Rohit who’d probably be in the top five batters of all-time,” Finch said.
“They’re exceptional, and the thing with the Indian side at the moment is their experienced players are getting the job done in the big games.”
India are fretting however over batsman Shikhar Dhawan who went off the field during the Australian innings Sunday after hurting his shoulder.
Dhawan, part of India’s T20 squad, watched the rest of the game wearing a sling on his left arm after been taken for an X-ray. The team said the scans were being assessed, reports AP, Bangalore, India.