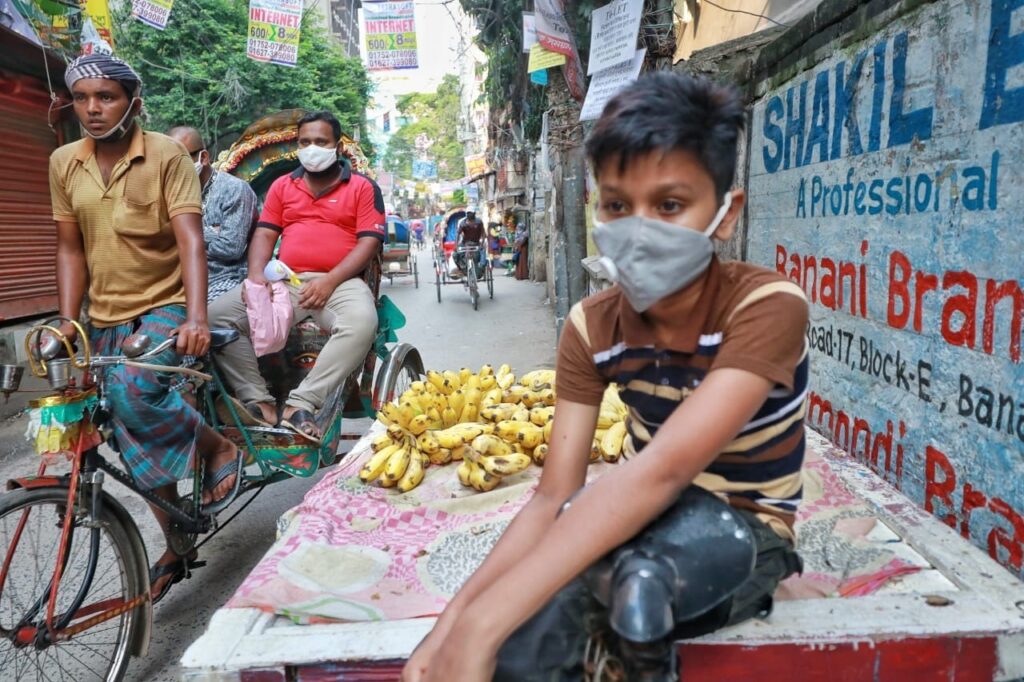 Dhaka, July 20 – The Covid-19 pandemic has affected people adversely of all ages and professions globally in various ways and threatened the livelihood of millions. A survey report during the ongoing pandemic, conducted by a non-government organisation, Action for Social Development (ASD), revealed that 86.6 percent child labourers in the capital of Bangladesh are financially affected.
The survey reached 240 children involved in different professions in the megacity and found that one-fourth of them have already lost their jobs.
Among those, 36.6 percent of children told that they were forced to be out of their work.
Some of the children who appeared in the survey said their parents have also lost jobs and already went home.
The survey, conducted in the first week of July, revealed that among 240 children, 46 have gone home to their village after losing their jobs.
The rest 194 children stayed in Dhaka and among them 49.5 percent children have changed their professions and many of them got involved in begging in Dhaka which is already visible on roads in the city, the survey said.
Besides changes in job conditions, children’s income has also been reduced during the pandemic.
Among the children who participated in the survey, 57.2 percent said their income of Tk 1000 to Tk 3,000 monthly, has reduced by 47.7 percent for coronavirus.
A total of 21.6 percent children, who earned Tk 3,000 to Tk 4,000 last month, are making 9.8 percent less than that.
However, 30.9 percent child labourers said their families depend on their income and now all of these populations have been affected.
All of the children participated in the survey by ASD, informed that they heard about the coronavirus pandemic but 22.8 percent said they do not use face masks.
Meanwhile, 78.9 percent of working children said they wash their hands when they return home from work and 20 percent said they take shower.
Speaking about any aid government or private organisations, 32 percent children said they got no assistance during this pandemic.
However, the positive news of the survey is that no family members of the children got infected with coronavirus.
Jamil H Chowdhury, executive director, ASD, said Covid-19 pandemic has left the children in various crises.
He said that children of low-income families may drop out from schools, and many of them will get involved in labour markets to afford the needs of their families, he said, adding that some of them will directly go into begging.
According to International Labour Organization (ILO) and UNICEF, Covid-19 crisis may push millions more children into child labour putting their lives at risk which could lead to the first rise in child labour after 20 years of progress.
A joint publication by these two bodies, titled “COVID-19 and child labour: A time of crisis, a time to act,” revealed that child labour decreased by 94 million since 2000, but that gain is now at risk due to the pandemic.
Talking about girls specifically, Chowdhury said they will be married off in their early ages and many children will face torture at home.
ASD Executive Director went on saying that many private schools have been shut for ever, and children of low-income families will enter the labour market for this ongoing pandemic.
He also feared that the country may go backwards in the education sector as many children will drop out from schools for their families’ financial crises and it may be an obstacle in achieving the Sustainable Development Goals (SDGs).
Tomoo Hozumi, UNICEF Representative in Bangladesh said the COVID-19 pandemic has a particularly negative impact on the lives, hopes and future of the most vulnerable children.
“Closure of schools and reduction of family income expose many children to the risk of child labour and commercial sexual exploitation. Studies have shown that the longer children are out of school, the less likely they are to return. We need to prioritize education and the protection of children now and throughout the duration of the pandemic,” said Tomoo Hozumi. – UNB