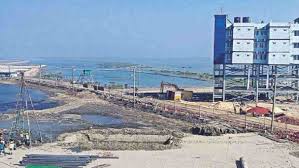 Dhaka, Feb 23 (UNB): Japan will have a stronger cooperation with Bangladesh, especially for enhancing regional stability and connectivity in the region, as the development of Bangladesh contributes to the stability of Indo-Pacific region, says a senior official at the Japanese Ministry of Foreign Affairs.“Bangladesh is achieving a higher rate of economic growth. We’ll further promote comprehensive partnership with Bangladesh,” Senior Regional Coordinator at Southwest Asia Division of the Japanese Ministry of Foreign Affairs (MoFA) Hitomi Sato told UNB in an interview.
Bangladesh and Japan are currently focusing more on infrastructure development and business partnership under “BIG-B” initiative.
The two countries have deepened friendship and partnership in a number of areas, including Matarbari deep seaport, Dhaka Metro and Terminal 3 of the international airport in Dhaka.
The Japanese, the MoFA official said, both the leaders (Prime Ministers) affirmed that the development of Bangladesh through regional connectivity would contribute to the overall stability of the Indo-Pacific Region.
Under the Bay of Bengal Industrial Growth Belt (BIG-B) initiative, she said, Japan and Bangladesh would continue collaborating towards development in the Southern Chattogram area, including the highly efficient coal-fired power station, as well as bolstering cooperation which could contribute to long-term decarbonisation through supporting the application of renewable energy.
Sato said Japan will continue its support and cooperation with Bangladesh in accelerating the economic growth which brings benefits for all the people of Bangladesh and beyond.
Responding to a question, she said investment and trade also need to be promoted further for the faster economic growth of Bangladesh.
“In order to invite more Japanese private companies to operate in Bangladesh, the issue of improving the business environment will remain important,” said the senior Japanese official adding that Japan will continue supporting Bangladesh’s efforts to that end.
Sato said Japan will continue to support Bangladesh to overcome social vulnerabilities in various fields, including health and education, disaster management so that Bangladesh can achieve the status of a middle-income country by 2021, sustainable development goals by 2030 and the status of a developed country by 2041.
Responding to a question, Sato said the concept of free and open Indo Pacific aims to promote peace, stability and prosperity in the region.
She said they are focusing on ensuring the international order based on rule of law and promoting freedom of navigation and free trade.
“This concept targets neither any specific country nor any agenda against any framework. In this context, Japan intends to cooperate with countries in the region and beyond,” said the Japanese MoFA official.
She said Japan does not see the BIG-B initiative conflicting with any other global initiatives.
Referring to the telephone conversations of the two Prime Ministers, Sato said both leaders welcomed the fact that the exchange of notes had been signed earlier under which an ODA Loan Agreement provided in response to the ongoing coronavirus disease (Covid-19) crisis in Bangladesh.
Bangladesh expressed its gratitude for the support from Japan and the two countries agreed to firmly cooperate towards containing the spread of the Covid-19 pandemic.
Responding to a question on the Rohingya issue, Sato said Japan continues encouraging the government of Myanmar to take necessary and concrete efforts in order to start the repatriation process at the earliest. “Japan also continues supporting the efforts of Bangladesh.”
Japan appreciated the Bangladesh government’s efforts of accepting displaced persons from Rakhine State, Myanmar.
Bangladesh stressed the importance of early repatriation of those displaced persons and expressed her gratitude for Japan’s support so far.
Responding to a question on global fight against terrorism, Sato said Japan laid emphasis on strengthening coordination and collective measures against violent extremism which is the root cause of terrorism.
“We’ve noticed Bangladesh government’s efforts in its fight against extremism. Bangladesh has made many policy measures. So far, I think, Bangladesh is quite successful,” she said, adding that still a lot remains to be done, and Japan is ready to support Bangladesh.
Noting that Bangladesh is now on a new frontier of economy and investment, Japanese Ambassador to Bangladesh Ito Naoki recently said the country will keep growing strongly beyond the Covid-19 pandemic.
He said Bangladesh will march forward with quality infrastructure projects which will give the country a completely different look in the next three-five years.
“Within the next three-five years, things will be completely different, the face of the nation will look so different and the landscape of infrastructure will be so different with the implementation of quality projects,” said the Japanese Ambassador.