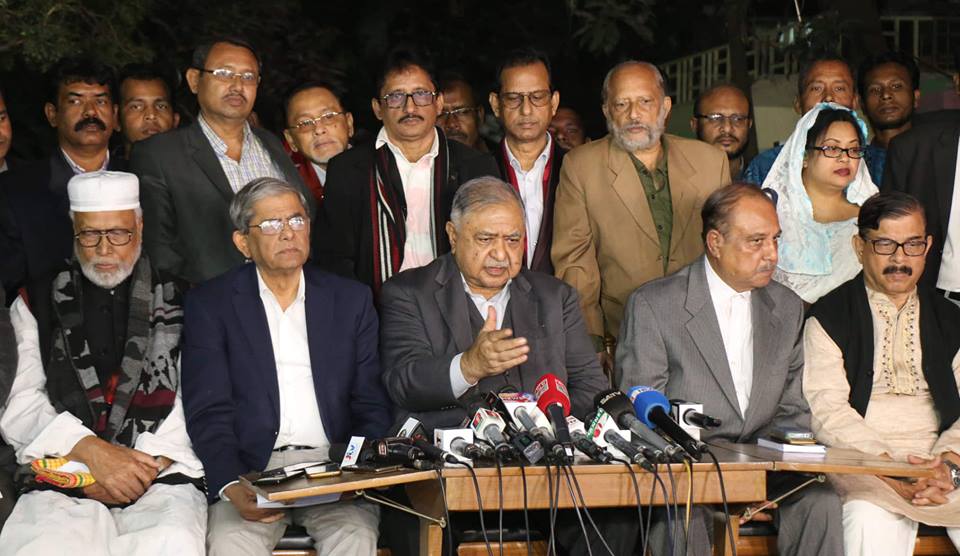 Dhaka, Dec 23 – The opposition alliance Jatiya Oikya Front, where the BNP is a major partner, will consolidate the greater unity of the alliance in the new year to wage movement to restore democracy in the country. Oikya Front top leader and Ganaforum president Dr Kamal Hossain said this while talking to reporters after the meeting of steering committee of the alliance at his Motijheel chamber yesterday.
This year is being ended in a frightening situation. In the New Year we will consolidate the greater unity. We will do whatever is necessary to save the country based on unit of the people. We will establish government of people, he said.
Dr Kamal, also eminent jurist, the people want restoration of the peoples right provided by the Constitution.
The constitution reads that the people are the owner of the power, he said asking that whether they remain in that position. They are rather being attacked in various manner, he added.
The Oikya Front leader condemned the attack on leaders and activists of Sadharan Chhatra Adhikar Songrokhon Parishad including DUCSU VP Nurul Haque Noor and blamed the Chhatra League for the attack.
He termed the incident as shameful and said it was a planned attack and he condemned it.
The people are worried about the country’s prevailing situation as what he said they (ruling party) are going ahead with supreme power centering the one party rule.
He questioned whether there is democracy in the country and said the spirit of liberation was is being killed in the name of independence.
Dr Kamal demanded fair investigation into the attack on DUCSU VP to find out the perpetrators.
President of Jatiya Samajtantrik Dal ASM Abdur Rab said they would continue their movement to establish the government of the spirit of liberation war, professionals and people irrespective of political affiliation.
Presided over by Dr Kamal Hossain, the meeting was also attended, among others, by Dr Abdul Moin Khan of BNP, Abu Syed of Ganaforum and Dr Zafrullah Chowdhury. – Staff Reporter