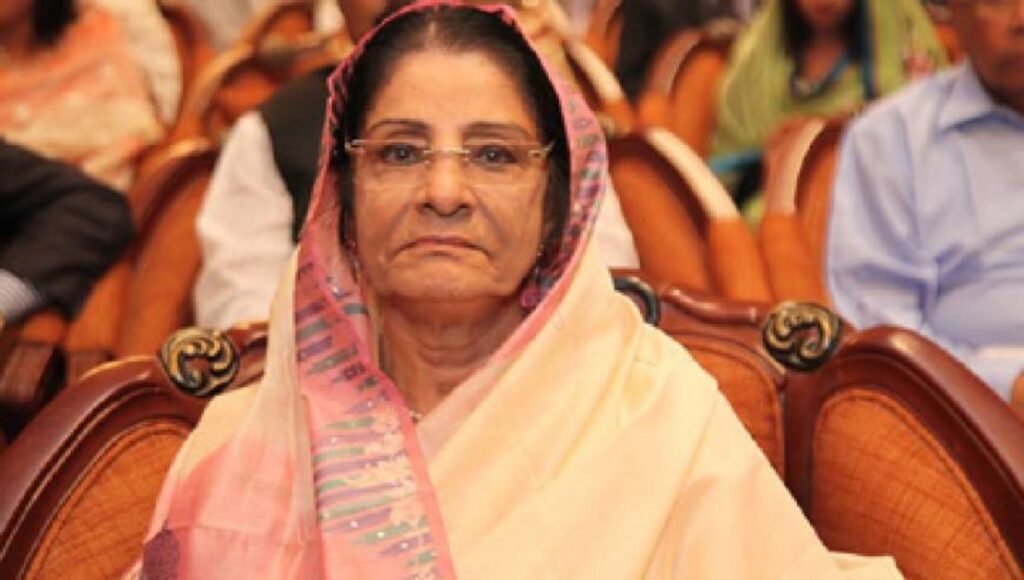 Dhaka, Sept 05 – Dispute in the Jatiya Party (JP-Ershad), main opposition in the parliament, over its chairman position, has taken a serious turn as the party’s senior co-chairperson Raushan Ershad was declared chairperson by one of its faction yesterday.However, many had earlier predicted that the Jatiya Party might be split into two after the death of its founding chairman and former president HM Ershad who died on July 14 at Combined Military Hospital (CMH) in Dhaka at the age of 89.
JP factional chief Raushan Ershad yesterday cleared that she does not accept GM Quader as the chairman of the party following the death of founder HM Ershad.
Briefing to the media at Raushan’s Gulshan residence, JP senior presidium member Anisul Islam Mahmud declared the party’s senior co-chairperson Raushan Ershad as JP Chairperson according to what he said was in line with the party’s charter effectively, splitting the party into two factions.
He told the media that according to the article 20, sub-section 2(A) of JP constitution, the party’s senior co-chairman will be the chief of the party if chairman dies.
“So, I am declaring JP’s senior co-chairman Raushan Ershad as the chairperson of the party from today. And the party’s new chairman will be elected through its national council session within next six months,” he said.
He said that GM Quader will remain in his previous–co-chairman position of the party and Moshiur Rahman Ranga will remain the party’s secretary general.
Replying to a question whether GM Quader will accept the decision or not, Mahmud said, “the party will not be split and I think GM Quader will accept the decision.”
He said the decision over selecting opposition leader in the parliament will be finalized in the party’s parliamentary board meeting.
In the briefing, Raushan urged the party’s all leaders and activists to get united to strengthen the organization.
Meanwhile, following Raushan’s announcement, GM Quader called a press briefing at the party’s Banani office yesterday and explained that why he claimed himself as the chairman of the party.
He also said action will be taken against those who declared Raushan Ershad as the party chair.
Briefing to the media Quader said, “According to the party charter, he is still the chairman. And those who declared Raushan Ershad as the chair broke the party discipline and action will be taken against them in this regard.”
Over selecting opposition leader in the parliament, GM Quader said according to the article 22 of JP constitution, the party chairman will select the leader of the parliamentary party and he/she will be made as opposition leader in the parliament.
“My brother HM Ershad used to select opposition leader in the parliament, in this way. And for which there is no need to call parliamentary meeting in this regard,” he said. Besides, most of the parliament members our party wants to see him as the leader of the opposition in the parliament, Quader added.
Earlier, on 18 July, party secretary general Moshiur Rahman Ranga formally announced HM Ershad’s younger brother GM Quader as Jatiya Party chairman at a press conference.
Before his death, Ershad through an organisational instruction had announced that GM Quader would be the party chairman in his absence. “So, we’ve decided that GM Quader is our party chairman,” Ranga said.
Four days later, Raushan in a statement said GM Quader cannot be declared the chairman of the party without any decision at the party forum.
On April 4, HM Ershad reinstated Quader as the co-chairman of JP and later on May 4, he announced that Quader would be the chairman of the party in his absence.
“I would like to inform JP leaders and activists at all levels and its supporters and well-wishers that in my absence, the party’s present co-chairman GM Quader will act as the chairman of the party,” Ershad had said.
However, Jatiya Party’s division came to the spotlight once again as Jatiya Party senior co-chairman Raushan Ershad on Wednesday wrote to the speaker not to accept the letter of GM Quader sent to her on Tuesday for officially recognising him as the leader of the opposition in parliament.
In the letter sent to speaker Shirin Sharmin Chaudhury, Raushan said GM Quader sent the letter without any decision at the party forum and meeting of the Jatiya Party parliamentary party.
Before sending the letter, some Jatiya Party leaders, including Anisul Islam Mahmud, Mujibul Haque Chunnu and Fakhrul Imam, had a long meeting with Raushan at her Gulshan residence.
Jatiya Party joined the 11th general election as the key partner of the grand alliance and bagged 22 seats. After the election, the party decided to play the role of opposition in parliament.
However, most party MPs and presidium members are backing GM Quader while some MPs and presidium members loyal to Raushan want her to play the role of party chairperson and the opposition leader, JP insiders said. – Staff Reporter