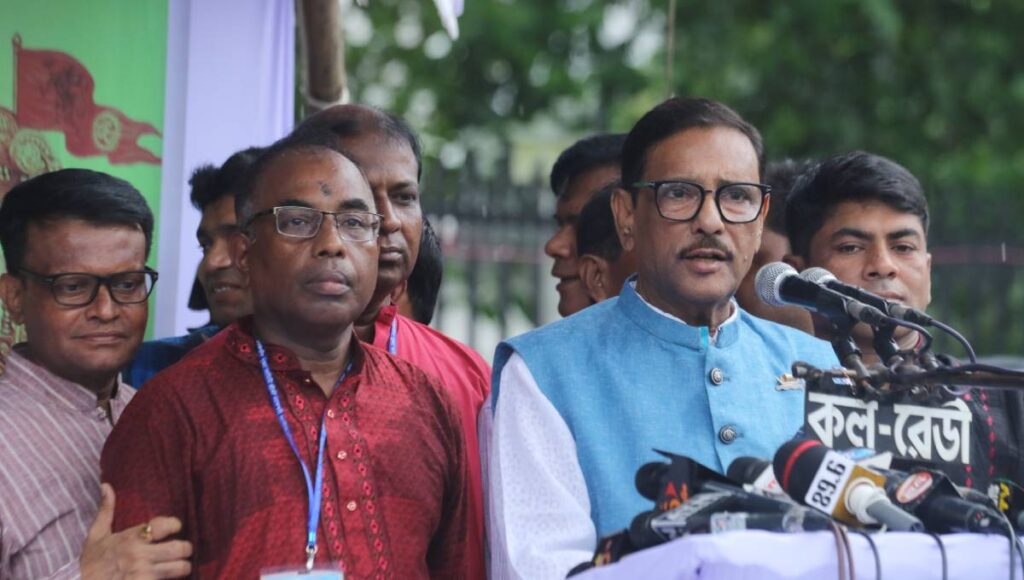 Dhaka, Sept 06 – The ruling Awami League general secretary Obaidul Quader on Friday said that their party would never interfere in the internal affairs of Jatiya Party (JP-Ershad), the main opposition in the parliament. “The crisis JP is now facing after its founding president HM Ershad’s death, is their internal matter. The ruling party would not interfere in their (JP) internal affairs. They (JP leaders) themselves will resolve their crisis,” he said.
Quader, also the road transport and bridges minister came up with the statements while addressing a discussion organized by Dhaka City South Unit of Awami Jubo League, as part of month-long programme to celebrate the birthday of AL President and Prime Minister Sheikh Hasina.
“We have no headache about JP crisis. They will select who will be their party chief or who will be the leader of opposition in the parliament. As per the rules of procedure the Speaker of the parliament will elect the leader of the opposition in the House. Neither Prime Minister Sheikh Hasina nor her party AL would back any faction of JP,” he said.
About BNP’s claim that the government has hands in JP crisis, the AL general secretary said, “What the BNP claim is false. It is an internal issue of JP. There is no question to interfere in their (JP) internal matter.”
Meanwhile, the dispute within the Jatiya Party over the post of chairman took a serious turn as both HM Ershad’s wife and his bother wants to be chairman of the party.
The party’s senior co-chairperson, Raushan Ershad, was declared chairperson by one of the factions on Thursday while GM Quader insisted that he is chairman of JP and those who declared Raushan Ershad as chairperson have violated party discipline and action will be taken against them.
Speaking about Prime Minister Sheikh Hasina’s leadership, the ruling party minister said the leadership of Sheikh Hasina is like a magic, narrating that her development approach puts BNP in trouble.
“The development approach of Sheikh Hasina put BNP in trouble and it could not get rid of this. That’s why the party is making lobby with foreigners,” he said.
Quader said normally a political leader thinks about the next general election, but Sheikh Hasina thinks of the development of next generation.
“It is our duty to uphold the development and image of Prime Minister Sheikh Hasina among the people of the country. And Jubo League is doing so,” he added.
The AL general secretary said Sheikh Hasina possesses an outstanding leadership, which is not found in other leaders, as she has affection for the country’s 17 crore people.
Jubo League chairman Omar Faruque said the country is moving forward under the leadership of Prime Minister Sheikh Hasina, while its people have been enjoying the freedom of expression.
Marking the birthday of Sheikh Hasina, he said, Jubo League will hold rallies and exhibitions and distribute leaflets in the capital to present the development of the government.
Jubo League general secretary Harunur Rashid, its presidium members Mujibur Rahman Chowdhury, Abdus Sattar Masud and Ataur Rahman Ata, Vice-presidents Sarwar Hossain and Anwar Iqbal, organising secretary Mizanur Rahman Bakul, president of Dhaka City South Jubo League Ismail Chowdhury Samrat and its acting general secretary Rezaul Karim Reza, among others, spoke on the occasion. – Staff Reporter