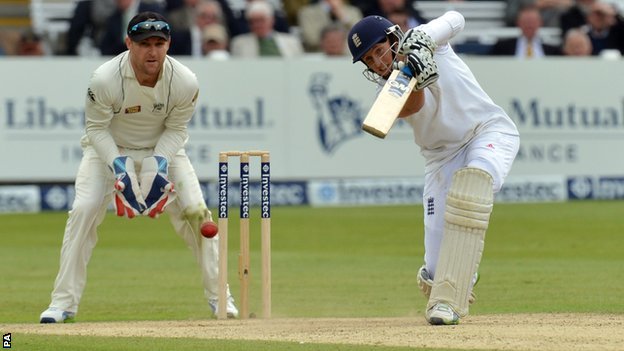 By Sam SheringhamThe first Test between England and New Zealand hangs in the balance after a riveting third day at Lord’s.England looked to be batting New Zealand out of the game as the in-form Joe Root (71) and Jonathan Trott (56) put on 123 for the third wicket.
But a late collapse which saw them lose four wickets for 12 runs left a low-scoring match delicately poised with the hosts on 180-6, 205 ahead.
But the real fireworks came deep into the final hour when England’s serene progress towards a match-winning lead was spectacularly interrupted.
Tim Southee made the breakthrough when he bowled Root off an inside edge and followed up with the wicket of Jonny Bairstow, who was cleaned up playing across the line.
Matt Prior pulled to square leg to complete a pair and Trott was bowled by a superb delivery from Kane Williamson that spun sharply out of the rough.
New Zealand lost their last seven wickets for 60 runs as they crumbled to 207 all out, a first-innings deficit of 25.
Nightwatchman Steven Finn survived to reach six not out by the close, while Ian Bell, who came in at number eight having spent the day recovering from a bout of flu, is yet to score.
With the rest of England’s recognised batsmen now gone, Bell will be charged with pushing the lead beyond 250, a target that would prove extremely challenging on a wearing pitch that is offering increasing assistance to the spinners.
“The state of the wicket is a positive for us,” Root told BBC Sport. “We have Graeme Swann, who is obviously a fantastic off-spinner, and it will suit him down the ground.”
Having started the day in a strong position on 153-4, the Black Caps lost captain Brendon McCullum and were bowled out before lunch as James Anderson claimed 5-47 – his fourth five-wicket haul in Tests at Lord’s – and Finn mopped up the tail to finish with 4-63.
McCullum, who was later forced into keeping duties when BJ Watling suffered a leg injury, is capable of scoring quickly and heavily and it was his attacking instincts that proved his downfall as he took a swing at Broad and nicked it through to Prior.
Williamson brought up his fifty off 158 balls and added 10 more before he was caught down the leg side off Anderson.
Southee went straight into slogging mode, carving Finn for three fours before top-edging a huge heave and gifting Root an easy catch.
Bruce Martin was bowled by a beauty from Anderson that held its line to uproot off stump before Finn removed Watling and Trent Boult in the space of five balls to complete a fine morning’s work for England.
After a positive start to their second innings, England lost both their openers in quick succession when Alastair Cook chased a wide one and edged to Dean Brownlie, who took his second diving slip catch of the match, and Nick Compton lost his off stump when beaten for pace by Neil Wagner.
England needed a calming influence and found one in Trott, who anchored the innings while the more fluent Root played his shots.
The 22-year-old Yorkshireman, who has three scores in excess of 150 this season, batted positively in attack and defence, putting away anything loose and taking quick singles whenever he could.
He brought up his second Test fifty off 78 balls and struck eight fours in all.
Trott was his usual unflappable self, contentedly playing second fiddle to Root and helping himself to runs square of the wicket whenever the New Zealanders dropped short.
Their partnership was broken when Root played on as he attempted a tired forward defensive to Southee.
With the door ajar, New Zealand pushed it wide open with three more late scalps to set up an intriguing fourth day.
“It’s going to be a big challenge for us to come back tomorrow, take the last four wickets and then chase the total because the wicket is suiting the bowlers,” said Williamson. “We’ll have to play good cricket.”
(Source: BBC Sport)