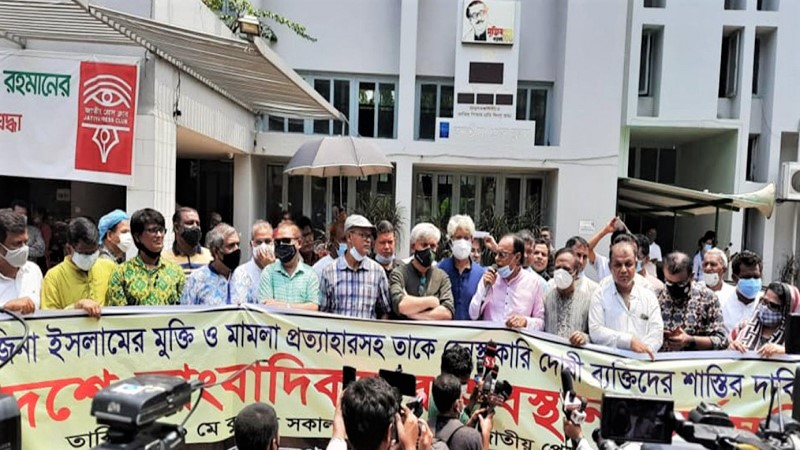 Dhaka, May 19 :  Journalists on Wednesday formed a human chain in front of the Jatiya Press Club demanding unconditional release of journalist Rozina Islam and punishment of those involved in harassing her at the Secretariat.Dhaka Reporters Unity, Bangladesh Federal Union of Journalist, Barishal Divisional Journalist Association, Bangladesh Secretariat Reporters Forum, Bangladesh Photo Journalists Association and other organizations joined the human chain around 11 am.
They also demanded withdrawal of false case filed against Rozina.
Besides, Dhaka Reporters Unity (DRU) held a protest rally in front of its office demanding the same.
Rozina, senior journalist of Prothom Alo, was handed over to police on Monday night after being held at the Secretariat for over five hours.
Rozina was arrested for allegedly attempting to illegally “collect sensitive government documents and taking photos of them” from the Secretariat on Monday.
An FIR was filed against Rozina under the Official Secrets Act and sections 379 and 411 of The Penal Code on a complaint filed by the Health Services Division at Shahbagh police station.
Later, a Dhaka court on Tuesday sent Rozina, to jail after rejecting the police’s demand for her five-day remand.
Rozina Islam was taken to Kashimpur Central Women’s Jail on Tuesday afternoon after a Dhaka court rejected police’s remand plea.
Besides, the Ministry of Health and Family Welfare has formed a three-member probe committee to look into the confinement and later handover to police of journalist Rozina Islam at the Secretariat on Monday.