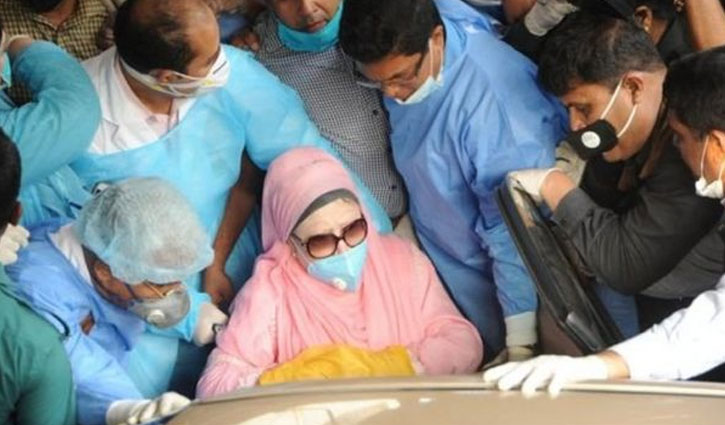 Dhaka, May 9 – BNP Chairperson Khaleda Zia has tested negative for Covid-19, fighting the deadly virus for 27 days since she had been infected.“Madam (Khaleda) underwent the Covid test on Saturday and her report came out negative,” the BNP chief’s medical board member Dr AZM Zahid Hossain told reporters early Sunday.
Another physician of her medical board said, “Madam is still being given oxygen support though her overall condition marked a little improvement. Her oxygen level is coming down to 90 percent when there’s no oxygen support,” he said.
The physician, wishing anonymity, said though the amount of fluid in her lungs has decreased, it’s still being extracted from her lungs which is now a matter of concern.
He said the BNP chief’s blood sugar level is gradually coming under control while pain in her joints has relieved significantly.
The 76-year-old BNP chief, who tested positive for Covid-19 for the second time on April 24, was admitted to Evercare Hospital on April 27 for a thorough health checkup.
She was shifted to the CCU of the hospital with shortness of breath on Monday last.
On April 28, a 10-member medical board, headed by Prof Shahabuddin Talukder, was formed for the treatment of Khaleda at the Evercare Hospital a day after her admission there.
Khaleda Zia tested positive for Covid-19 on April 11 as eight people at her residence were infected with the virus. She underwent the second Covid-19 test on April 24 and her report was positive.
Amid the coronavirus outbreak, the government freed Khaleda Zia from jail for six months through an executive order suspending her sentences on March 25 last year. – UNB