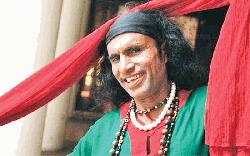 Culture Desk
One of the popular Boul singers of the country Kuddus Boyati is critically sick.
He was admitted to the National Institute of Chest, Mahakhali in the capital yesterday. He has been suffering from afflictions in his gonadal and lungs for quite some time now. Last year he received medical donations from Prime Minister Sheikh Hasina. But now for better treatment he needs to be taken out of country. His family is considering Bangkok, Thailand as the destination.
It has been learnt that Kuddus Boyati could eat at least something before arrival at the hospital. But now he cannot eat anything by mouth. As saline is the only resort for him now. His family members have claimed that the doctors are taking good care of him at the hospital. But they want to take him to Bangkok as soon as he gets better.
Kuddus Boyati was born in 1959 in Netrokona. He came into limelight through Humayun Ahmed’s writing of the song ‘Ei Din Din Noy’ in the 90s.