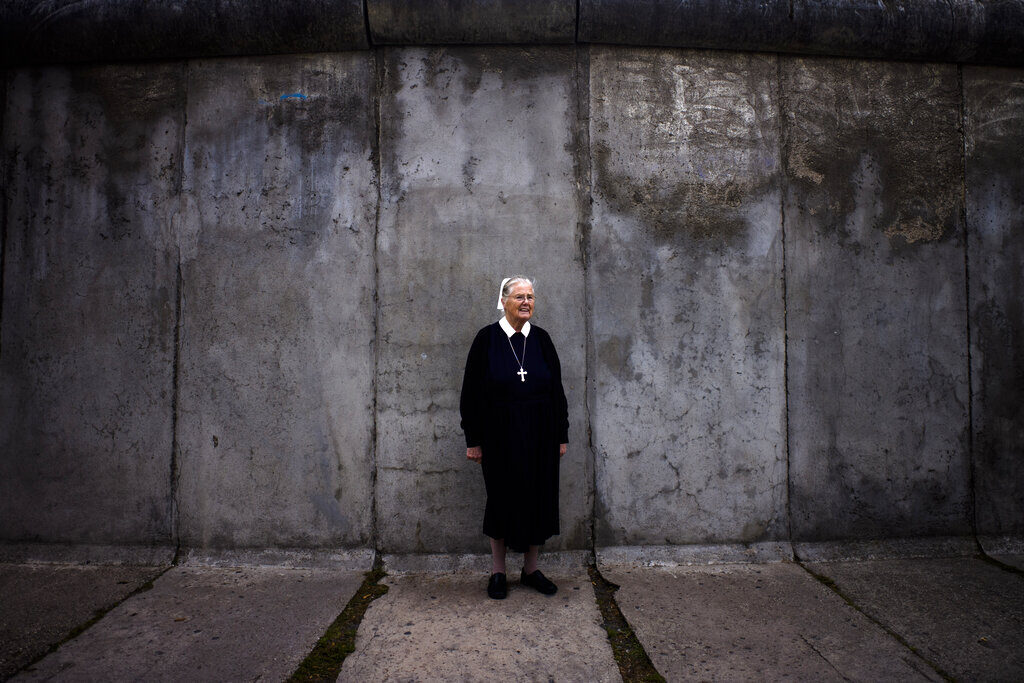 Sister Brigitte Queisser walks slowly along the decaying remains of the Berlin Wall, its rusty rebar reinforcement exposed where the concrete has crumbled away. The 77-year-old pauses to catch her breath, opens a gate and steps from the former democratic West Berlin into what used to be the communist East.
What is a simple step today was a monumental feat for those who tried to escape Soviet-controlled East Berlin during the nearly three decades that the wall divided that part of the city from its free, western side. Some attempts were meticulously planned for months, others brazen and spontaneous.
Many succeeded flawlessly. But as a deaconess of the Lutheran Lazarus Order, Sister Brigitte witnessed first-hand the consequences for those who weren’t able to pull it off quite so smoothly.
Directly across the street from the wall, on Bernauer Strasse, her order ran a clinic that provided immediate help to those who were injured trying to get through the barrier, with its watch towers and armed soldiers. The sisters also took care of burying those who died seeking freedom.
“Families were torn apart, people couldn’t move freely from one neighborhood to the other anymore, many died trying to run away to the West,” she said. As she thought back to those hard times, Sister Brigitte touched the silver cross dangling from a long necklace over her dark-blue habit.
“It was a nightmare,” she said.
As Germany prepares to celebrate the 30th anniversary of the fall of the Berlin Wall next month, it also commemorates those who were arrested, injured or died as they sought to escape by tunneling under the wall, swimming past it, and climbing or flying over it. At least 140 people died trying, according to the latest academic research.
The first iteration of the Berlin Wall was built in 1961, billed by East German leader Walter Ulbricht as an “anti-fascist protective wall” intended to keep his country secure. In reality, it was built to keep its citizens from fleeing to the West.
It stood for 28 years, until Nov. 9, 1989, a sinister presence that was seen as the front line and a symbol of the Cold War between the United States and the Soviet Union.
The Lazarus deaconesses were at the heart of it, their residence and clinic on Bernauer Strasse cut off from the order’s cemetery by the wall itself.
“We took care of everybody in our first-aid station who was somehow injured,” remembers 84-year-old Sister Christa Huebner. “Dead or alive, cut open, fractured, everything — we made sure they received first aid and also checked whether they had to be hospitalized.”
Many of the sisters worked as nurses in the hospital. From its windows overlooking the wall, they witnessed daredevil escapes.
“I saw young men jumping from the roofs on the other side into the nets of the West Berlin firefighters; other men roped down on clothes lines and came to us with their hands all bloody,” Sister Christa said as she reminisced about those turbulent years while sitting with a handful of other retired women from her order in the mother house, which is still in the same complex where the clinic used to be.
“One time I saw how a manhole cover on the street opened from below and two people climbed out — they’d escaped underground through the canalization.”
“But there were also those who weren’t so lucky,” she added. “We took care of those who died as well.”
Cut off from the order’s own graveyard, the sisters had to find a different burial place.
“Our graves were part of the death strip,” said Sister Brigitte. “We couldn’t take care of the graves any longer, police were patrolling there day and night.”
Today, the deaconesses can again access their own cemetery and visit the graves of their sisters.
Standing under an old linden tree, Sister Brigitte looks at the marble gravestones marking the resting spots of her late companions. The faint sounds of school and tourist groups visiting where the wall used to stand tall drift over from Bernauer Strasse, now a major tourist attraction.
“I often thought, ‘God, can you please take away this wall,'” Sister Brigitte says. “When it finally happened, it was like a fulfillment — but at the same time it was also beyond comprehension.”
She added: “It was a miracle,”reports AP, Berlin.