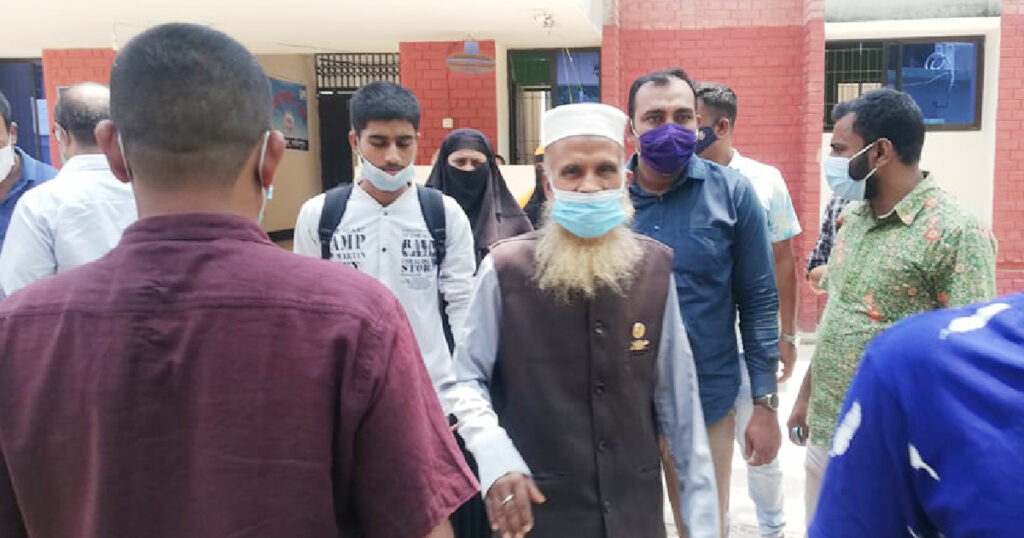 Faridpur, Apr 25 :  Waliyar Rahman, father of Hefazat-e-Islam Joint Secretary General Mamunul Haque’s “second wife” Jannat e Jharna, has been taken into police custody for interrogation.Detective Branch (DB) of Dhaka Metropolitan Police left for Dhaka from Faridpur’s Alfadanga Police Station with Waliyar on Sunday at around 11:30am.
Waliyar is a freedom fighter and was the president of ward 4 of Gopalpur Union Awami League in Alfadanga upazila. On 21 April, he was suspended from his post.
Alfadanga Police Station Officer-in-Charge Wahiduzzaman said, “Waliyar was not detained or arrested, DB police will talk to him for the sake of an investigation.”
Waliyar’s wife Shirin Begum said the OC and other policemen came at night and took him away, but they did not say why.
Earlier, local Awami League leaders alleged that they had received death threats for issuing a showcause notice to Waliyar.
Monayem Khan, Faridpur’s Alfadanga upazila Gopalpur union Awami League president, filed a general diary (GD) with the police station in this regard.
According to the GD, Monayem received death threats from three different phone numbers on April 13 evening, for issuing the showcause notice.
Md Farid Uddin, general secretary of the same Awami League unit, also reportedly received death threats the same evening from a number where the caller identified himself as Mamunul.
On April 12, the local Awami League issued a showcause notice to freedom fighter Waliyar. The notice was sent to him through a letter signed by Monayem and Farid over his alleged link with Hefazat.
Waliyar never informed the party leaders about his family’s involvement with Hefazat; so, it is a risk that the organisational work plan of Awami League may be leaked through him, the letter said.
A satisfactory reply within the seven working days was also sought in the notice, but Waliyar did not respond to it.
On April 3, Mamunul Haque was found along with a woman, at a resort in Narayanganj’s Sonargaon, whom he claimed to be his “second wife”, reports UNB.