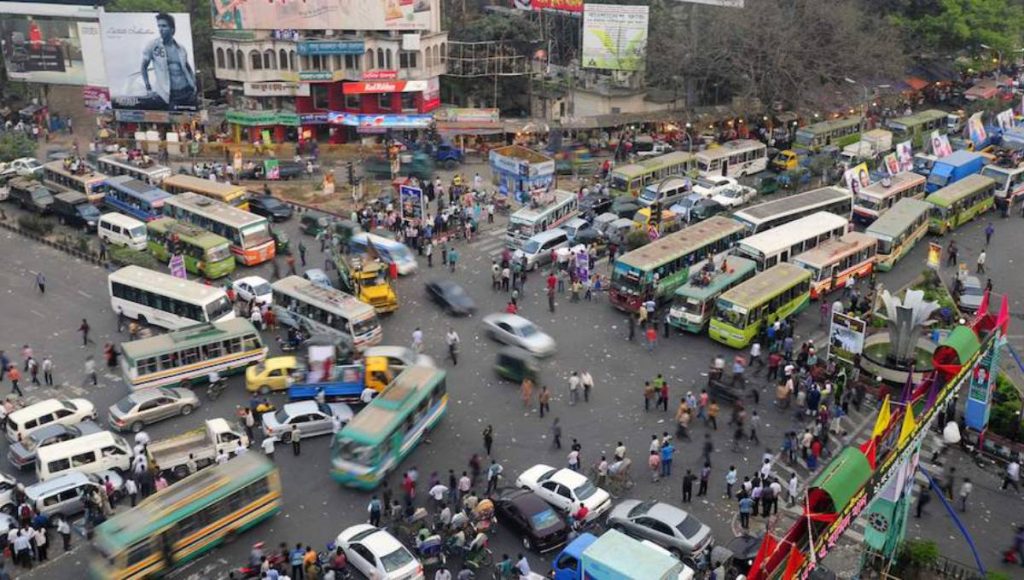 Dhaka, May 19 (UNB) – Road discipline in the capital remains as bad as ever even after observing many traffic weeks and awareness campaigns, and carrying out drives by law enforcers.

The reasons, as they mentioned, also include unplanned development, unauthorised parking, the growing use of private and small vehicles, the presence of rickshaws on key roads, and lack of proper enforcement of laws.

Last year, the death of two college students triggered a countrywide road safety movement. At that time, there were widespread crackdowns on drivers and vehicles without licences. But things have gone the downhill as soon as the movement stopped.

Though it looks impossible, the traffic situation in the capital is still manageable, they said.

Ashis Kumar Dey, general secretary of the National Committee to Protect Shipping, Roads and Railways (NCPSRR), suggested leaving the city traffic to the Army for a year.

Iqbal Habib said there is no improvement in the city’s traffic situation though the engagement of law enforcers have increased to some extent in the name of conducting some drives and observing traffic weeks.

During the drives, the law enforcers fined vehicles, mainly for violating some traffic rules. “But they didn’t take action against contractual appointment of drivers, arrest drivers without licenses or seize unfit vehicles. These three issues must be strictly dealt with to restore discipline on roads.”

Habib, also a joint secretary of Bangladesh Poribesh Andolon, said most buses in Dhaka are unfit. “The government should give the bus owners tax-free facility and soft loan to procure high-quality buses to replace the old ones.”

He said there is no effort in sight to remove rickshaws from the main roads and discourage the use of private vehicles to increase the road capacity for mass transport. “It’s also regrettable that traffic signal system is still ineffective in the city.”

Prof Shamsul Hoque said the government is struggling to bring back discipline on the city streets for lack of implementation of some pragmatic plans and enforcement of relevant laws.

He said the traffic situation will improve considerably if some low-cost projects and actions in light of the revised STP can be implemented.

As per the STP, he said, the government must recover footpaths, make roads and intersections more usable, bring buses under some franchises, enforce traffic rules and restore discipline in the transport sector.

Besides, Hoque said, the number of small vehicles, like auto-rickshaws, human-haulers and rickshaws, must be restricted on main roads. “The government doesn’t need much money to implement these plans, but it has no interest to do so. It only focuses on mega projects like flyover and metro rail to solve traffic problems, but those are not solutions.”

He said there are also guidelines in the revised STP about developing effective traffic safety and traffic management and public transport system and establishing government’s control over bus terminals.

Prof Mizanur Rahman thinks that it is not possible to improve the city’s traffic situation without some engineering solutions outlined in the revised STP. “The road network must be expanded alongside improving the city’s transport management capacity.”

Besides, he said, sufficient mass transport, trained and disciplined drivers, and effective traffic management and introduction of bus route franchising system are necessary to restore discipline in the transport sector and end unhealthy competitions among buses for passengers.

Enayet Ullah said some government policies need to be changed to improve the traffic situation in the capital. “Though there’s a demand for 5,000 passenger buses in the capital, Bangladesh Road Transport Authority (BRTA) has given route permits for nearly 2,500 ones.” It only encourages plying of unauthorised buses to meet the passengers’ demand.”

Enayet Ullah said the contractual system can be abolished if bus counter system can be introduced. “It’ll significantly cut competition among bus drivers for passengers and reduce the number of accidents.”

As a large number of drivers reportedly take drugs, he advocated dope tests and taking actions against addicted drivers. Driving under influence is one of the key reasons for road crashes, he said.

Ashis Kumar Dey said the BRTA, police and other government authorities concerned have failed to root out anarchy from the city roads and transport. They have given in to the political influence of a small number of transport owners and workers associations leaders.

Under the circumstances, Ashis Kumar, the government should deploy the Army for a year to bring back discipline on the city streets and prevent accidents and causalities.