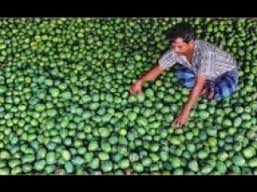 Mango, the juicy and delicious fruit of the summer season, has started
appearing in the markets of Rajshahi and Chapainawabgonj districts,
famous for the juicy summer fruit, for the last couple of days.
Two major varieties- Gopalbhog and Khirsapat- along with some other
indigenous varieties have appeared in the markets catching eyes of the
commoners but most of them are being frustrated with the high price.
However, the popular summer fruit will be available in the local
markets by mid June abundantly when all the varieties will appear in
the markets.
Growers, agriculture officials and scientists expect bumper production
of mango in the two districts this season as favourable weather
conditions have helped about 80 to 90 per cent flowering of the trees
and smooth growth of the delicious summer fruit.
“There will be bumper production of mango this year if there is no
further storm and cloudy weather”, Dr Shafiqul Islam, Chief Scientific
Officer of Regional Horticulture Research Station in Chapainawabgonj,
said.
Mango growers and traders who have been taking care of the trees since
December last year are hopeful of good business this season.
Most of the mango orchard owners in the districts lease out the
orchards to middlemen for one to five years. However, ownership of the
trees remains with the orchards.
According to the same sources, there are 22,82,930 mango trees on
around 28,000 hectares of land in the region, said Ekram Hossain,
Additional Director of the Department of Agriculture Extension (DAE)
in Rajshahi.
Last year two lakh tonnes of mangoes was produced from 20 lakh trees
on 25,000 hectares of land, he added.
But this season around 3.15 lakh tonnes of mango production are
expected in the famous mango producing districts if everything goes
well.
The region has a long tradition of producing more than 150 varieties
of high quality tasty mangoes including langra, fazli, lakhna and
khirsapat.
A large number of people are engaged in different jobs, from nursing
to harvesting and packing, during the mango season every year.
“If the good weather continues, it will lead to bumper production and
we hope a good earning this season,” said Sabiar Rahman, a mango
trader of Baneshwar in Puthiya Upazila of the district.
Matiur Rahman, a mango grower of Charghat Upazila, also expressed hope
of good earning with the prospect of bumper production.
This two districts produces mango worth over Tk 1500 crore every year,
said Abu Bakker Ali, President of Rajshahi Chamber of Commerce and
Industry.
Mango is an important agricultural item in the region as income and
livelihood of a large number of people is heavily dependant on its
cultivation, said farmers, traders and agriculture officials.
(BSS, Rajshahi)