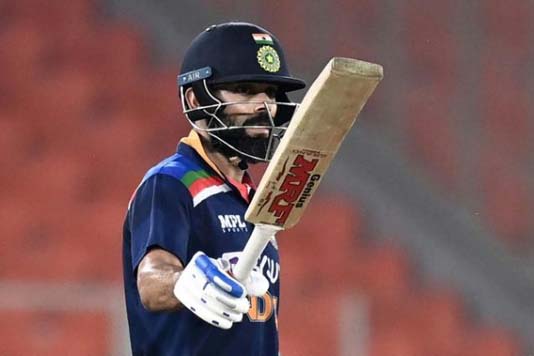 AHMEDABAD, India – Skipper Virat Kohli said he will continue to open the batting in Twenty20 cricket after his unbeaten 80 set up India’s series-clinching win over England.

Kohli was promoted up the order to partner Rohit Sharma for the first time in the shortest format and the move proved key as they put on a blazing stand of 94 to lay the foundation of India’s 224-2, their highest Twenty20 score
against England.

Sharma blasted 64 before departing and Kohli, who started cautiously, finished with a flourish in his 52-ball knock in Ahmedabad.

“I am going to open in the IPL as well,” said Kohli, who captains Royal Challengers Bangalore in the Indian Premier League, after India’s 36-run win on Saturday gave them a 3-2 series victory.

“Look I have batted at different positions, but I feel we do have a very solid middle-order now. And now it’s about your two best players getting maximum number of balls in T20 cricket. So I would definitely like to partner
Rohit at the top.”

Kohli anchored the innings after being invited to bat first by England captain Eoin Morgan, while Sharma blazed away with four fours and five sixes in his 34-ball blitz.

Once Sharma fell to Ben Stokes, Kohli took the lead and finished with seven fours and two sixes. “As I rightly said, if we have a partnership and we both are set then you know that one of us is going to cause some serious damage,” said Kohli.

“And the other guy feels much more confident when one of us is still in and they know that they can play freely. “So it augers well for the team. I would like this to continue and hopefully continue this form through to the World Cup.”

India are scheduled to host the T20 World Cup in October and November. Kohli finished as the leading scorer over the five matches with 231 runs, including three half-centuries, and was named player of the series.

The teams will now contest a three-match one-day international series next week before the IPL starts on April 9. Morgan said he wants his players to improve and shine in the IPL with the T20 World Cup looming later this year.

“Taking advantage of the up-and-coming IPL is going to be huge. As a team and individuals we don’t want to stand still but move forward,” said Morgan, who captains Kolkata Knight Riders.

“Any opportunity guys get at the IPL you want to try to make the most of it, because we are going to be playing at home all summer and then we go to Bangladesh and Pakistan.”BSS