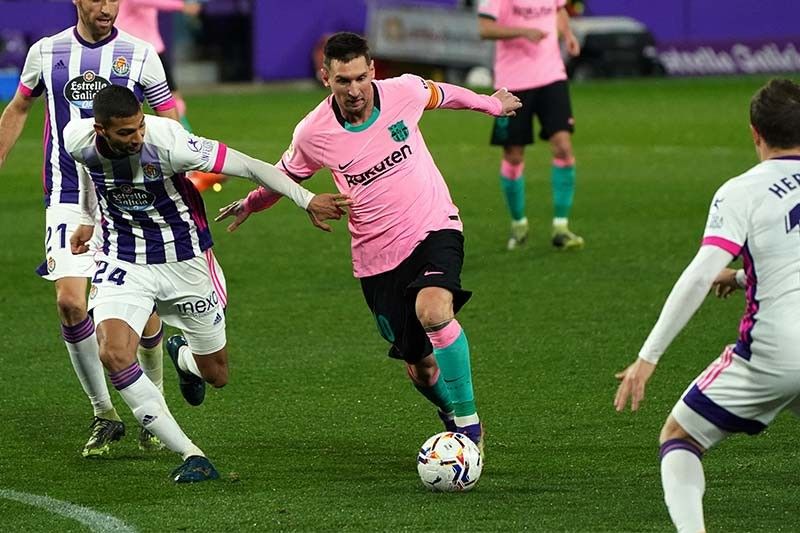 MADRID – Lionel Messi beat Pele’s record of goals for a single club when he scored his 644th for Barcelona in a 3-0 victory against Valladolid on Tuesday.

The Argentina forward scored Barca’s third goal when he collected Pedri’s backheel and struck the ball past goalkeeper Jordi Masip in the 65th minute.

“When I started playing football I never thought I would break any records. And even less the one I achieved today,” Messi posted on Instagram shortly after the game.

“I can only thank all those who helped me over the years, my teammates, my family, my friends and all those who support me every day.”

Messi had equalled Pele on Saturday in a 2-2 draw with Valencia.

The two men scored at almost an equal rate for their clubs.

It was the 33-year-old Argentine’s 749th competitive match for Barca, meaning he has scored a goal every 1.16 games.

“Like you, I know what it’s like to love wearing the same shirt every day. Like you, I know that there is nothing better than the place we feel at home,” Pele wrote to Messi on Instagram after the Argentine tied the record.

Messi, a six-time Ballon d’Or winner, is by far the highest scorer in Barca history (Cesar Rodriguez is next on 230 goals), the highest scorer in the history of the Spanish league championship (451 goals, ahead of Cristiano Ronaldo’s 311), and the player who has won the most trophies with the Catalan club (34, including four Champions Leagues).

“I see Messi happy. He is working hard, and he is a very important part of our attacking game,” said Koeman after the win.

Pele claims to have scored more than a thousand goals, counting all the matches he played, official and unofficial.

But in competitive matches Pele appears to be second to Austrian and Czechoslovakian striker Josef Bican, who football historians have calculated scored 805 goals between 1931 and 1955 playing for half a dozen clubs and three national teams.

Pele, with between 757 and 767 goals in competitive matches over his career, which also include 92 Brazil internationals and two seasons with the New York Cosmos, is ahead of Messi with 714 for club and country and the more travelled Cristiano Ronaldo (754).

Pele still holds the record for most international goals by a South American with 77 for Brazil but Messi has 71 for Argentina.BSS/AFP