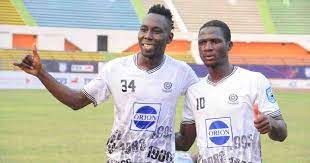 With the day’s feat at Bangabandhu National Stadium, Mohammedan not only moved to 5th place but also avenged their 2-1 defeat against Saif in the first phase league.

Mohammedan has so far secured 25 points from 14 matches while Saif has slipped to the sixth slot, from 5th place, with their previous credit of 23 points from 14 encounters.

Earlier, Mohammedan made a good start to the second phase beating their neighbour Arambagh 2-1, riding on a double strike of Mali forward Souleymane Diabate.

After a barren first half in the day’s match, Cameroon striker Yassan Quatching put Mohammedan ahead in the 52nd minute (1-0), while Maraz Hosssin restored the parity for Saif in the 69th minute (1-1).

Souleymane, who scored twice in Mohammedan’s 2-1 victory over Arambagh in the last match, again came to his team’s rescue, scoring the match-winner in the 83rd minute (2-1).UNB