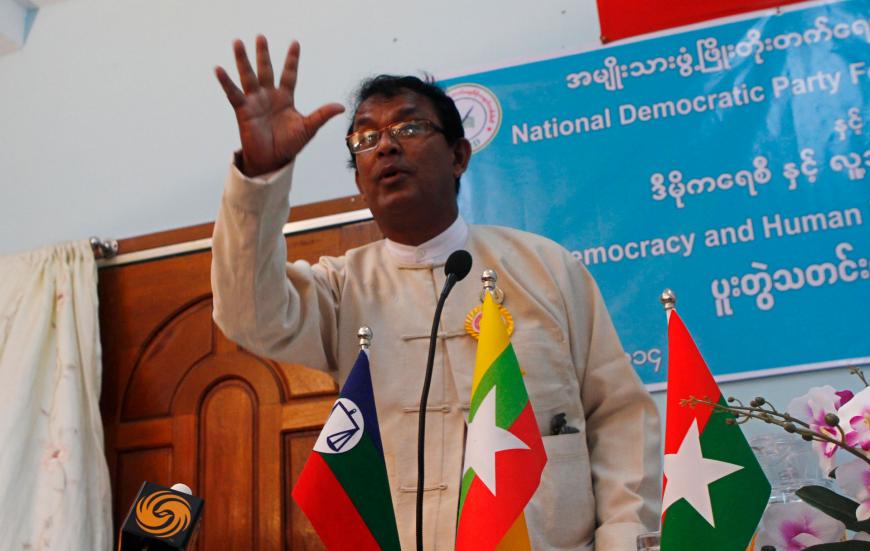 Shayna Bauchner, Researcher, Asia Division
The Myanmar government is again blocking Rohingya Muslims from running for political office.
On Monday, election officials barred Kyaw Min, head of the Rohingya-led Democracy and Human Rights Party (DHRP), from running in the national parliamentary elections in November. He was disqualified along with two other DHRP candidates because their parents were allegedly not citizens as required by election law, one of the various tools used to oppress the Rohingya population. Kyaw Min has been fighting to represent his community for decades. He won a seat in the country’s 1990 elections, in which Rohingya could vote and run for office. After the military junta annulled the results, he joined up with the pro-democracy shadow legislature of Aung San Suu Kyi, then an opposition activist.
In 2005, Kyaw Min was arrested along with his wife and three children, including his daughter Wai Wai Nu, today a fierce Rohingya advocate. The family spent seven years in prison before being released in a 2012 amnesty.
Being banned from running for office is nothing new for Kyaw Min. Prior to the 2015 national elections, the government for the first time stripped Rohingya of the right to vote, and the election commission rejected Kyaw Min’s candidacy along with that of 14 others from DHRP.
The broad support for Suu Kyi’s National League for Democracy (NLD) party raised hopes that Kyaw Min and other Muslims would be given space to lead their communities, govern alongside other democracy activists, and fight against the rising tide of Islamophobia.
That never happened.
The NLD took office in 2016. In August 2017, the military launched a campaign of mass atrocities against the Rohingya that forced over 740,000 to flee to Bangladesh. The 600,000 Rohingya who remain in Rakhine State are essentially confined to camps and villages. They remain without citizenship or the ability to vote this November.
Yet Kyaw Min persists. He plans to appeal their candidacy rejections.
Ahead of the 2015 elections, the DHRP party secretary described to us why they persevered: “They say so many terrible things about us. Monks make hate speeches against Muslims.… That is why we want to take part in the elections. We have to show that Muslims are peaceful and want to help the country.”
The authorities’ unwillingness to recognize the Rohingya’s place in government sadly – and dangerously – has made it all too easy to blot out their place in Myanmar society altogether. – Human Rights Watch