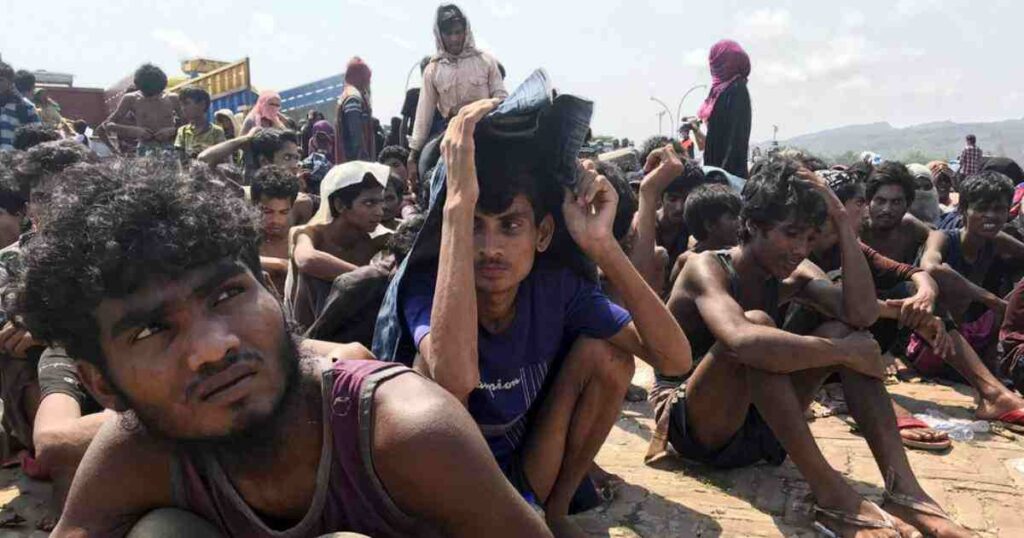 Myanmar minister writes to Bangladesh Foreign Minister Momen
Dhaka, Jan 22 – Myanmar has said they are committed to beginning the repatriation of Rohingyas as per the bilateral agreement signed with Bangladesh in 2017. Myanmar’s International Cooperation Affairs Minister Kyaw Tin conveyed this message to Foreign Minister Dr AK Abdul Momen in a recent letter.
The Myanmar minister also said they are committed to ensuring peaceful relations with all neighbours, including Bangladesh and resolving any problems peacefully.
Kyaw Tin said they want to resolve any bilateral issues with neighbours through mutual partnership.
He hoped to begin the repatriation of Rohingyas to Myanmar soon through the tripartite talks held with Bangladesh, Myanmar and China on January 19.
The Myanmar International Cooperation Minister agreed with Dr Momen that the countries need solidarity and mutual cooperation in facing the unprecedented challenges posed by the Covid-19 pandemic.
He mentioned that his country took back Rohingyas in 1978 and 1992 through mutual discussion.
Kyaw Tin wished peace and prosperity for the people of Bangladesh and good health of Dr Momen.
He thanked the Bangladesh Foreign Minister for writing to him on January 1.
Kyaw Tin and Dr Momen served as Permanent Representatives in the UN for their respective countries and they developed an intimacy at that time, said the Ministry of Foreign Affairs.
Earlier, Foreign Minister Dr AK Abdul Momen said Bangladesh has handed over a list of 840,000 Rohingyas to Myanmar for verification.
“Myanmar has verified very few people. They’re very slow. They verified only 42,000 people (5 percent). There’s a serious lack of seriousness,” said the Foreign Minister.
Dr Momen said they are doing their part but Myanmar is not helping the same way. He said he is always hopeful of beginning repatriation as history says they took back their nationals in 1978 and 1992.
More than three years ago, Myanmar’s soldiers “targeted, killed, and raped” Rohingya and burned their villages, as the United Nations, Refugees International, United States Holocaust Memorial Museum, the U.S. State Department itself, and many others have documented.
Over 800,000 Rohingyas fled the “genocidal violence” and Bangladesh is now hosting over 1.1 million Rohingyas.
Bangladesh is trying in multiple ways – bilaterally, multilaterally, tri-laterally, and through the judicial system – to find a lasting solution to the Rohingya crisis.
Bangladesh and Myanmar signed the repatriation deal on November 23, 2017.
They then signed a document on “Physical Arrangement”, which was supposed to facilitate the return of Rohingyas to their homeland.
But repatriation attempts failed twice in November 2018 and August 2019 – clearly amid Rohingyas’ “lack of trust” in the Myanmar government and things would have been different had they returned.
Subsequently during the 74th UNGA held in September 2019 in New York, China took an initiative to propose the tripartite framework with their presence largely in an overseeing role, that can nevertheless hold both sides to account on their respective commitments to each other.
The Bangladesh side had already complained of Myanmar acting in ‘bad faith’ during negotiations, whereby they never had any intention of taking the Rohingya back and were only meeting to keep up appearances.
However, soon after a meeting of the trio on January 20, 2020, the coronavirus lockdowns started taking its toll on different parts of the world.
Bangladesh pushed Myanmar hard on creating a favourable environment for Rohingya repatriation with an expeditious verification process and “cautiously expressed optimism” to begin it in the second quarter of this year.
The two countries will address the relevant issues, including a joint working group meeting with an expansion that will be held in February first week to prepare the ground for repatriation in the second quarter of the current year.
The China-Bangladesh-Myanmar meeting was chaired by Chinese Vice Foreign Minister Luo Zhaohui and Myanmar Deputy Minister of International Cooperation Hau Do Suan led the Myanmar side.
Masud Momen who led the Bangladesh side in the meeting said at least the process should start and it will take a long time to send back all Rohingyas, more importantly the number is growing with 90,000 children that took birth in the last three years.
Bangladesh proposed starting the repatriation in the first quarter but Myanmar said the logistical arrangement will take some more time, especially they have a meeting in Parliament on April 1.
“Apparently, it’ll be difficult to begin in the first quarter,” said Masud Momen adding that a DG-level hotline will be opened for instant communication between the two countries over repatriation issues.
The Foreign Secretary said they want to proceed by taking lessons from the two failed attempts so that this time the repatriation can be started successfully.
“There’re many factors. We’re keeping those factors into consideration as we couldn’t be successful by giving two dates previously. We’re taking lessons from that and finding ways on how we can become successful. We’ll remain engaged sincerely,” he said.
Masud Momen said they do not think everything will be resolved overnight but they want to do it taking all on board, including the international community and INGOs.
The Foreign Secretary said the Ministry of Foreign Affairs has written to the office of the Refugee, Relief and Repatriation Commissioner (RRRC) to open a repatriation wing.
The wing will be solely responsible to do repatriation related works as the MoFA cannot do it from here directly. – UNB