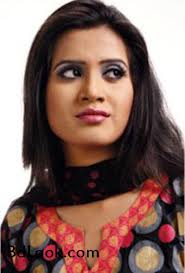 The fans of Nancy, one of the most popular pop artistes of recent times, might not know that their favourite singer has a background of Nazrul and folk music. Before the versatile singer ventured into the world of pop-music she was an enlisted artiste at Bangladesh Betar from 2002 as a Nazrul, modern and folk singer and began performing for BTV in several programmes, including “Saptdinga” and “Jibon Bangladesh Moron Bangladesh” till 2005.
Nancy has worked as a playback singer from 2006. In the popular films “Akash Chowa Bhalobasha,” she worked with Habib Wahid and the sound-tracks “Prithibir Joto Shukh” and “Hawaye Hawaye Dolna Doley” was well received by the audience of Bangladesh. She was awarded with the National Film Award for Best Female Playback Singer in 2011 for her playback work in the film “Projapoti.” Her career as a pop-singer started with the release of her solo-album “Bhalobasha Odhora” in 2010.
In an interview with a Dhaka daily, popular pop singer Nancy said that she is planning to start work on her new album which is scheduled to be released during Eid-ul-Azha.