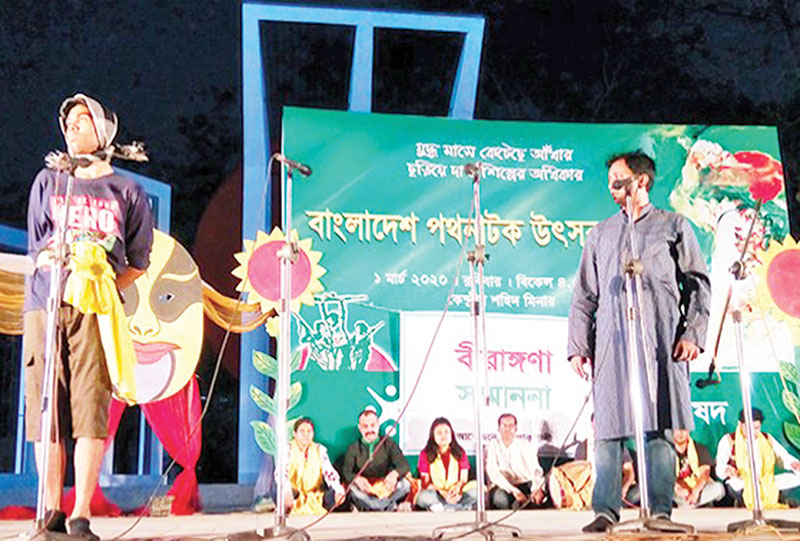 Culture Desk
Theatre troupe Natyadhara stages its 27th production ‘Poster’ on the second day of Bangladesh Street Theatre Festival at Central Shaheed Minar on  Monday.The seven-day Bangladesh Street Theatre Festival began at Central Shaheed Minar on March 1. The festival has been organised by Bangladesh Path Natok Parishad, an umbrella organisation promoting street theatre across the country. The organisation has been organising the festival since 2002.
A total of 38 troupes are participating in this year’s festival.
“Poster”—-this street play, written by Riad Mahmud, has been jointly directed by Kamal Hasan and Dipanbita Iety. The play attempts to raise public awareness about sexual violence. It depicts sufferings of war heroines along with contemporary issues.
Members of Natyadhara Litu Shakhawat, Sabyasachi Chanchal, Kamal Hasan, Gazi Rahisul Islam Tamal, Newton Halder, Mahbub Khan, Dipanbita, SB Meraj and Hafsa Akter acted in ‘Poster’.
Besides, theatre troupes Chandrakala Theatre, Britya Natyadal, Tejgaon College Theatre, Shangshaptak Theatre and Sattik Natya Sampraday staged plays at Central Shaheed Minar on March 2.
Street theatre is a form of theatrical performance and presentation in outdoor public spaces without a specific paying audience. These spaces can be anywhere, including shopping centres, car parks, recreational reserves, college or university campus and street corners. They are especially seen in outdoor spaces where there are large numbers of people. The actors who perform street theatre range from buskers to organised theatre companies or groups that want to experiment with performance spaces, or to promote their mainstream work. It was a source of providing information to people when there were no sources of providing information like television, radio etc. Nowadays, street play is used to convey a message to the crowd watching it. Street play is considered to be the rawest form of acting, because one does not have a microphone or loud speakers.
Sometimes performers are commissioned, especially for street festivals, children’s shows or parades, but more often street theatre performers are unpaid or gather some income through the dropping of a coin in a hat by the audience.
The logistics of doing street theatre necessitate simple costumes and props and often there is little or no amplification of sound, with actors depending on their natural vocal and physical ability. This issue with sound has meant that physical theatre, including dance, mime and slapstick, is a very popular genre in an outdoor setting. The performances need to be highly visible, loud and simple to follow in order to attract a crowd.