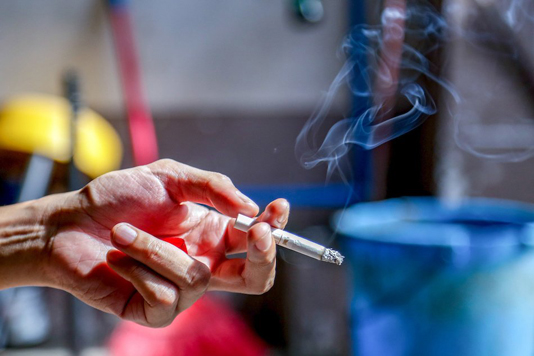 Chronic obstructive pulmonary disease, a debilitating lung condition, often develops as a result of decades of heavy smoking — but that does not explain why almost a third of all cases occur among people who have never smoked.The authors of a new study say they now have an answer, and it’s linked to how certain people’s lungs developed earlier on in their lives.
The illness — known as COPD — is the fourth leading cause of death in the United States, causing airflow blockage and breathing problems that limit people’s daily activities.
About one in ten adults over the age of 40 are thought to have the condition.
It was long thought that smoking and air pollution were the main causes — but as smoking rates and air pollution have declined in the US and the West more generally, COPD has persisted, and roughly 30 percent of people with the disease have never smoked.
The new US government funded research, which appeared in the Journal of the American Medical Association (JAMA) on Tuesday, involved analyzing the computerized tomography (CT) scans of 6,500 older adults’ lungs, including both smokers and non-smokers, with and without COPD.
“What was most striking was that people who had smaller than expected airways had a much higher risk of COPD compared to people with normal or larger airways,” lead author Benjamin Smith of Columbia University Irving Medical Center told AFP.
The team also looked at people who had smoked heavily for decades but never developed the condition, “and what we found was that these people had much larger than expected airways for their lung size,” added Smith.
“It suggests that people at this other end of the spectrum who have larger airway trees may have a reserve to withstand the harmful effects of tobacco smoke.”
To be sure, smoking remains an important risk factor. Smoke particles trigger immune responses that inflame and permanently damage airways, as well as destroying the air sacs inside the lungs, leading to emphysema.
But when the team analyzed their data to quantify which factors mattered most, “it turned out that this mismatch between airway and lung size seem to explain more of the variation in COPD risk,” said Smith, who is also a pulmonologist.
– Mysterious causes –
The air we breathe passes through the windpipe into smaller airways called bronchi and bronchioles.
As we grow, these airways develop in proportion to the size of the lungs, but in some people they go on to become smaller or larger than expected, a condition called dysanapsis.
The reasons for this aren’t clear, but present an avenue for further study, said Smith, who now has a grant to explore if there is a genetic basis for dysanapsis.
Another possibility is it’s related to how the lungs develop our childhood, starting from inside the uterus to when we stop growing — and whether factors ranging from maternal smoking to early exposure to air pollution to respiratory viruses might affect airway growth.
The hope is that by better understanding what the root causes of dysnapsis are, researchers will one day be able to design interventions.
Smith likened it to the development of treatments for rickets — a rare skeletal disorder that was common until the 20th century, when Vitamin D, calcium and phosphate were identified as being critical to healthy bone development.
In the more near term, said Smith, he hoped to disabuse the wider medical community of the idea that COPD is a single disease, with only one form of treatment.
Doctors have long observed that bronchodilators, inhaled medicines that relax the muscles in the lungs and widen the airways, work much better for some COPD patients than for others, and the new finding may help explain why, reports AFP, Washington.