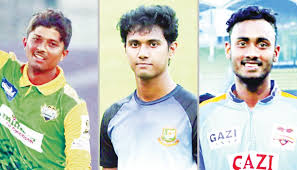 DHAKA — The three new players—Shoriful Islam, Hasan Mahmud and Mahedi Hasan who was called up in Bangladesh one-day squad for the first time expressed their hopes to cement the place if they get the chance to show their credential at some point of the series.

While Hasan Mahmud and Mahedi Hasan had already made their T20 debut, playing one and four matches respectively in shortest format of the game, Shoriful Islam is completely new in the squad.

They were rewarded for their consistent performances since cricket started in the country following a Covid-19 pandemic-induced break.

It is highly unlikely they could get a chance to play because of a settled ODI squad who would try to win all of the three matches in the series. Since the series is the part of ICC ODI super league, every point is important to make a direct qualification to the 2023 World Cup.

But they are very keen to make a mark.

“After the Under-19 World Cup, I played well in the BCB President’s Cup and Bangabandhu T20 Cup. If I can make it to the final XI, I will try to start from where I ended in the last two tournaments. I will try to keep up my place in the national team,” Shoriful said here today.

The young fast bowler said that it is a dream come true to share the dressing room with the likes of Tamim Iqbal, Shakib Al Hasan,Mushfiqur Rahim, Mustafizur Rahman.

He said the senior players are sincere enough to help him and every time he makes any error, there are here to help him to rectify those.

“When I started playing in the Under-19 team, I thought that I would get the chance to play with the likes of Shakib, Tamim, Mushfiqur, Mahmudullah, Mustafizur. The dream came true finally. Now it’s my target to stay with them permanently by performing consistently,” Shoriful said.

“The senior players are really sincere enough to help me to rectify my mistakes. They are here always to help me and keep me mentally charged up,” he said.

The Under-19 World Cup winning member said he believes that the Bangladesh national team is even capable of winning the World Cup if they can play as a unit.

“What was our main strength is that we stay as a unit during the Under-19 World Cup. We fought for our country. If we can fight as a group, I believe we can win the World Cup too,” he added.

His fellow paceman Hasan Mahmud echoed the same, saying that his target is to bowl with full vigor, if he is provided the chance.

“My target is to make my place permanent. If I get the chance, definitely I will try to make it count,” he said.

Mahedi Hasan who had already grabbed the attention as a quality all-rounder said now it’s the time for him to settle him into the ODI squad.

“Since I have got the chance, it is my target to make it count. I don’t know whether I will play in the final XI but if I get the chance I will play my natural game,” he remarked.BSS