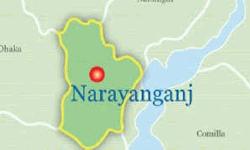 About 30 shanties were gutted in a fire that broke out at a ‘jhut’ (garments scrap) warehouse in Isdiar Bazar area in Fatullah on early Sunday.The fire originated at around 3:30am and soon engulfed over 25-30 shanties around the warehouse, said Abdullah Al Arefin, deputy director, Narayanganj Fire Service and Civil Defence.
Seven units from Demra, Hajiganj, Mondolpara and Narayanganj Fire Stations rushed to the spot and doused the fire after one and a half hours of frantic efforts, he said.
The cause of the fire could not be known yet.