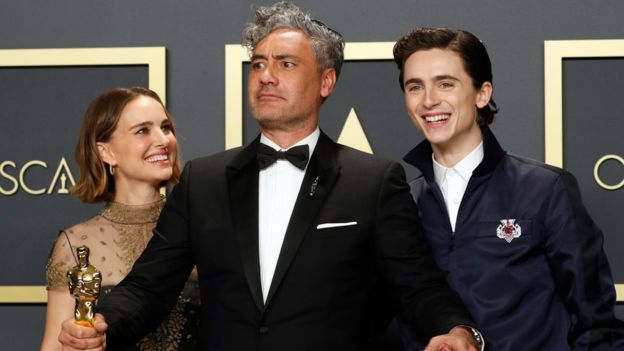 The US live TV audience for the Oscars fell to an all-time low on Sunday.
Roughly 23.6 million viewers tuned into the awards ceremony, according to the US broadcaster ABC, citing Nielsen.
The ratings fell sharply from last year when 29.5 million people watched, amid an industry-wide decline in linear TV viewing.

South Korea’s Parasite made history, becoming the first non-English language film to win best picture since the awards began 92 years ago.
Renee Zellweger won best actress for playing Judy Garland in Judy. Joaquin Phoenix was named best actor for Joker.
Despite the ratings slump, the Oscars, which had no host for the second year running, remains the most-watched awards show.
In 2019 the ceremony managed to buck a four-year trend in declining viewers and increased its audience by 11% to 26.5 million.
Musicians Lady Gaga and Bradley Cooper performed a much-celebrated duet, while Queen opened the show.
It was the first year the ceremony went without a host, which some had pointed to as a reason for its increased popularity.
But the new record low indicates the Oscars was not able to repeat that success in 2020.
Singer and actress Janelle Monae opened the three-and-half hour show, followed by performances by musicians Elton John and Billie Eilish.
The awards were presented by celebrity duos, including Timothee Chalamet and Natalie Portman, and Steve Martin and Chris Rock.
South Korean viewers celebrated when Parasite director Bong Joon-ho spoke partly in South Korean during his acceptance speech.
Other awards ceremonies, including the Emmy Awards, Golden Globes, and Grammys, also lost viewers this year.
The number of people who watched the 2019 Emmy Awards live fell by 32%.
Oscars: The biggest winners
 Parasite – 4
 1917 – 3
 Ford vs Ferrari – 2
 Joker – 2
 Once Upon A Time in Hollywood – 2
Parasite won four awards in total, while Sir Sam Mendes’s 1917 took three.
The World War One epic had been the favourite to win best picture, but its awards all came in the technical categories.
Brad Pitt won the first Oscar of his career for best supporting actor in his role in Quentin Tarantino’s Once Upon A Time in Hollywood.
Best actress winner Renee Zellwegger paid tribute to Judy Garland, who was nominated for two Oscars but never won.
Joker actor Joaquin Phoenix used his acceptance speech to cover topics from animal rights, to the environment and racism. – BBC News