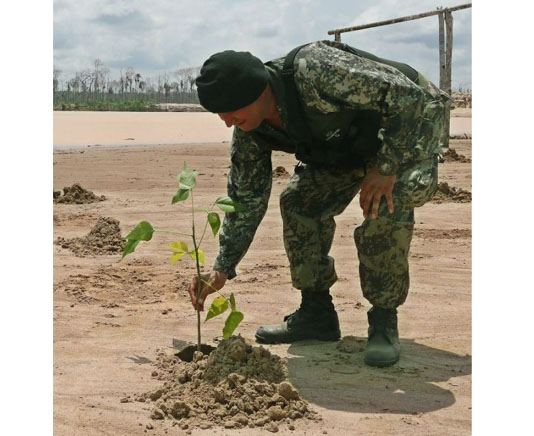 Peru opened a military base in the Amazon on Tuesday in a bid to tackle illegal mining, the main culprit for deforestation in the world’s largest rainforest.
“The government has taken the political decision to be present in this region to eradicate illegal mining,” said Defense Minister Jose Huerta at the inauguration of the base in the Tambopata nature reserve.
The reserve lies in the Madre de Dios region known as the capital of illegal mining in Peru.
The military base has been installed in an old camp of log cabins abandoned by illegal miners two weeks ago when Peru began its “Mercury” operation against the practice.
“We’ve come and we’ll stay as long as is necessary,” said Huerta. More military bases are planned.
“We’ve had a first two week phase and now we go to the second stage,” expected to last six months, he added.
Environment Minister Fabiola Munoz, who also attended the base opening, said Madre de Dios is an area of high biodiversity and great tourism potential “that has only been exploited a little bit.”
Munoz said tourists to Tambopata, 620 miles (1,000 kilometers) east of the capital Lima, spend more money than at Machu Picchu, the country’s top tourist attraction and former capital of the Inca empire.
– Drone and satellite patrols –
When four police and military helicopters landed at the site on February 19, they found a ghost town whose 350 inhabitants had escaped hours earlier.
They had left a huge desert of sand in the middle of the lush jungle through mercury contamination.
Each base will be marshalled by 100 soldiers, 50 police officers and a prosecutor for an initial period of six months, but the operation could last years.
Huerta said the aim was to remain until the area had been “completely reforested.”
Patrols will use drones, a Peruvian satellite and a military aircraft, he added.
During a visit to Peru 13 months ago, Pope Francis called for the protection of Amazonian communities and the rainforest’s natural resources.
Illegal mining, mainly for gold in the jungle and rivers, caused the loss of 9,000 hectares (22,000 acres) of rainforest last year but also generated other illegal activities such as people trafficking, mercury trafficking, hired killers and prostitution, authorities say.
The security services will be mostly concentrated in an area where 6,000 illegal miners are at work, with a lawless village of 25,000 having built up around their activities.
Recent satellite images from the Monitoring of the Andean Amazon Project (MAAP) have showed an acceleration in deforestation in the Peruvian part of the rainforest.
In the last two years, 18,440 hectares of rainforest have been lost in the Peruvian Amazon — the equivalent of 25,000 football fields, according to MAAP.
The Amazon, which measures over two million square miles (seven million square kilometers), spans nine countries and is one of the areas with the greatest biodiversity on the planet, reports AFP, Tombopata, Peru.