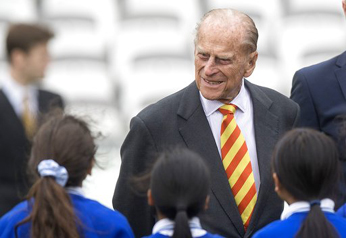 London, Apr 10 (AP/UNB) — When Prince Philip married the heir to the British throne, he knew he was stepping into virtually uncharted territory.
There was no official role for the husband of a sovereign queen, no constitutional duty or legal responsibility.“There was no precedent,” he said when he turned 90. “If I asked somebody, ‘What do you expect me to do?’ They all looked blank. They had no idea.”
His wife Elizabeth knew exactly what she had to do when she became queen in 1952 after the premature death of her father, King George VI. For Philip, though, her ascension to the throne marked the end of his career as a naval officer and a plunge into uncertainty.

But at that crucial moment, he carved out the part he would carry through the decades: the queen’s honest and unwavering bedrock of support through a turbulent reign in which the thousand-year-old monarchy was forced to reinvent itself for the 21st century. It was a role the Duke of Edinburgh played until his death Friday at age 99.
His marriage both defined and constricted his life, placing the irascible, tough-minded Philip three steps behind the queen in public, even if he played a significant role at home, including in raising four children.
His life spanned nearly a century of European history, starting with his birth as a member of the Greek royal family and ending with him as the longest serving consort in British history, surpassing Queen Charlotte, wife of King George III.
He was known for his occasionally deeply offensive remarks — and for gamely fulfilling more than 20,000 royal engagements to boost British interests home and abroad. He headed hundreds of charities, founded programs that helped British schoolchildren participate in challenging outdoor adventures.

Philip saw his sole role as providing support for his wife as she confronted the changing demands placed on a constitutional monarch who began her reign as Britain retreated from empire and steered the monarchy through decades of declining social deference and U.K. power into a modern world where people demand intimacy from their icons.
In the 1970s, Michael Parker, an old navy friend and former private secretary of the prince, said of him: “He told me the first day he offered me my job, that his job — first, second and last — was never to let her down.”
The queen — a very private person not given to extravagant displays of affections — once called him “her rock” in public.
In private, Philip called his wife Lilibet; but he referred to her in conversation with others as “The Queen.”

Over the course of the decades, Philip’s image changed from that of handsome, dashing athlete to arrogant and insensitive curmudgeon. In his later years, the image finally settled into that of droll and philosophical observer of the times, an elderly, craggy-faced man who maintained his military bearing in public despite a host of ailments.
Not content to stay on the sidelines, he promoted British industry and science, espoused environmental preservation long before it became fashionable, and travelled widely and frequently in support of his many charities.
In those frequent public appearances, Philip developed a reputation for being impatient and demanding and was sometimes blunt to the point of rudeness.
Many Britons appreciated what they saw as his propensity to speak his mind, while others criticized behaviour they labelled as racist, sexist or out of touch.