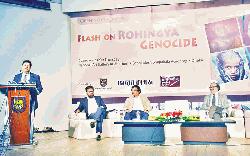 Culture Desk
A week-long photography exhibition titled ‘Flash on Rohingya Genocide’ is underway at National Art Gallery of Bangladesh Shilpakala Academy (BSA), Segunbagicha in the city. Inaugurated on January 2, the exhibition will continue till January 8. The photographs at the exhibition shed light on the horrifying experiences of massacre, led by Myanmar’s military force, witnessed by the Rohingyas.
Foreign minister AK Abdul Momen inaugurated the exhibition as the chief guest. The inaugural ceremony was presided over by Liaquat Ali Lucky, director general of BSA. Dr. Mizanur Rahman, Vice Chancellor of Jagannath University, joined the inaugural session as the special guest. They discussed the ongoing Rohingya crisis in their speeches.
Regarding the Rohingya issue, the exhibition features a total of 120 photographs including the works of four local photographers namely Mahmud Hossain Opu, Suman Paul, KM Asad and Salahuddin Ahmed. The exhibition has been jointly organised by the Daily Bhorer Kagoj, Bangladesh Pragatishil Columnist Forum and Bangladesh Shilpakala Academy.