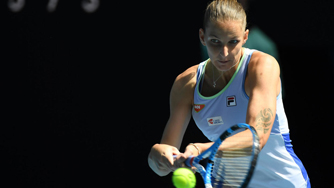 World number two Karolina Pliskova barrelled into the Australian Open second round on Tuesday as she chases her first Grand Slam crown.The 27-year-old Czech defeated France’s Kristina Mladenovic 6-1, 7-5 and plays Germany’s Laura Siegemund or American wildcard CoCo Vandeweghe next in Melbourne.
Pliskova, whose best Grand Slam appearance was defeat to Angelique Kerber in the final of the 2016 US Open, called it a “tough test” against 41st-ranked Mladenovic.
“We had some good matches in the past and it was tough mentally in the second set,” said Pliskova, who beat Naomi Osaka on the way to winning the Brisbane title this month.
Pliskova, a semi-finalist in Melbourne last year, said the Brisbane triumph had no bearing on the next fortnight.
“It’s a new beginning here so weeks before do not count and nobody remembers,” she said, reports AP, MELBOURNE.