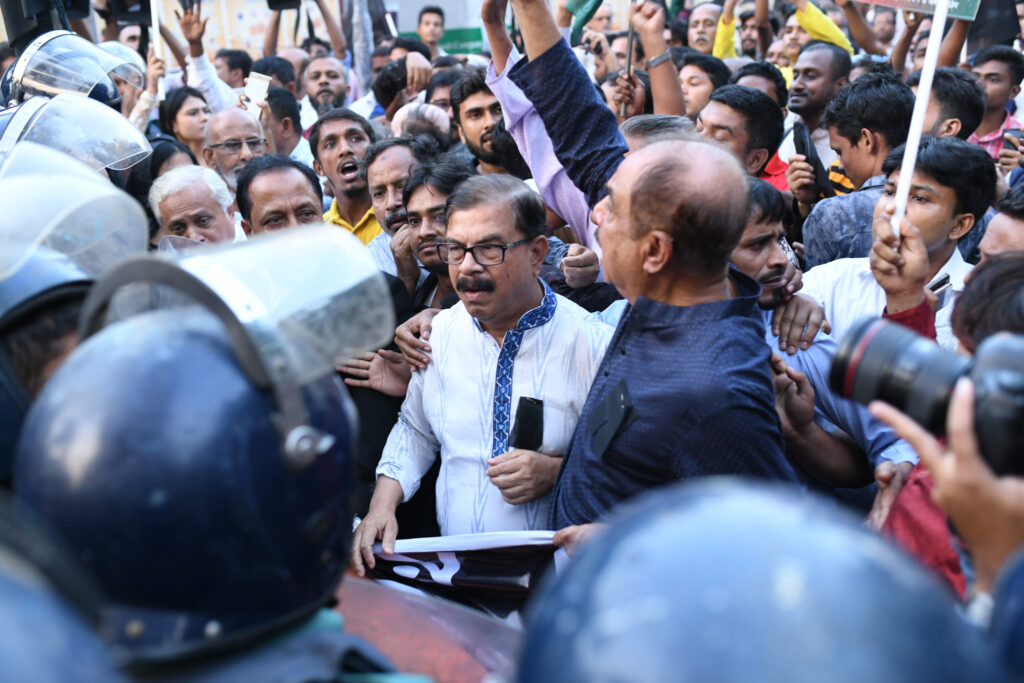 Dhaka, Oct 13 – Opposition alliance Jatiya Oikya Front could not take its citizen mourning procession to Shaheed Minar protesting the killing of BUET student Abrar Fahad as police obstructed the processionists within 100 yards from the Jatiya Press Club premises.After a short rally at Jatiya Press Club auditorium, the pre scheduled citizen mourning procession led by its top leader Dr Kamal Hossain was brought out at 5:15pm.
The police force deployed within 100 yards of the northwestern gate of the Jatiya Press Club created obstacle by setting plastic made road dividers on the road to Jatiya Shahid Minar and stopped the procession just after it headed towards Kadam Fountain.
The processionists bearing flags and wearing black badges, however, staged demonstration for few minutes and chanted different slogans demanding exemplary punishment of killers of Abrar, who was allegedly beaten to death by Chhatra League cadres in BUET on October 7.
Speaking the gathering, ASM Abdur Rab, a top leader of the Oikya Front, announced that they would hold a mourning rally on October 22 at an open place protesting the police obstruction and demanding punishment of Abrar’s killers.
He condemned the police obstruction to carry out the peaceful procession and questioned the police as to how they would stop the people when they would come out from their homes.
According to schedule, the Oikya Front wanted to carry forward the procession to Shaheed Minar in the Dhaka University premises.
Later, police forced the processionists to go back and clear the road for vehicle movement.
Dr Kamal took part in the procession on a car hoisting a black flag and he left the venue as the Oikya Front leaders concluded the programmer within 10 minutes.
BNP standing committee member Iqbal Hasan Mahmud Tuku, Shama Obayed, Tania Rab and Abdul Malek Ratan of JSD, Advocate Subrata Chowdhury and Prof Abu Syed of Gana Forum, Mahmudur Rahman Manna of Nagorik Oikya, Dr Jafrullah Chowdhury, Nurul Amin Bepari of Bikalpa Dhara, among others, took part in the procession.
Earlier, speaking at the protest rally, Dr Kamal Hossain asked the government to stay away from power to save the people and restore the democracy of the country.
“Enough is enough, please stay away from power. Otherwise, you will have to face severe consequences if the people get united against you,” he added.
The Oikya Front was formed on October 13 last year months ahead of December 30 parliamentary elections. – Staff Reporter