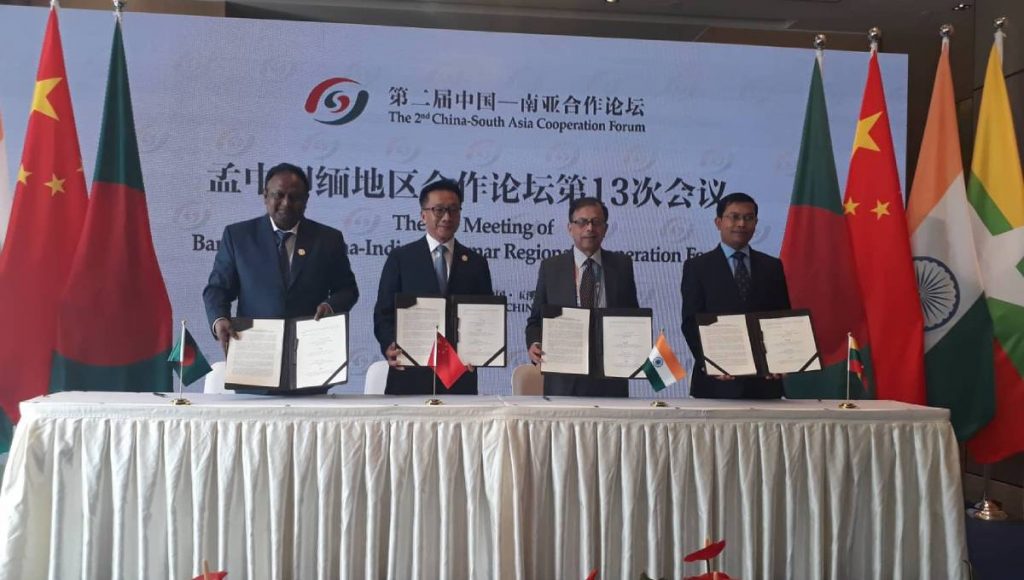 The four countries think that they should continue to improve the BCIM cooperation mechanism and the “government-support and multi-track” mode of operation.

The countries came up with the understanding at the13th meeting of Bangladesh-China-India-Myanmar Regional Cooperation Forum held along the Fuxian Lake here.

Representatives of the four countries signed a 12-point joint statement after the meeting.

The People’s Government of Yunnan Province hosted the meeting.

The four countries emphasised that comprehensive connectivity in roads, railways, waterways, aviation, energy and digital sectors will greatly enhance regional competitiveness, according to the joint statement.

They said efforts should be made to optimise the policy environment for connectivity and facilitate the efficient, systemic and orderly cross-border flow of goods and services.

The countries at the meeting were of the view that the BCIM Forum serves as an important platform for the four countries to advance mutual understanding, policy dialogue, alignment of development strategies and exchanges between all sectors to promote regional peace, stability and development.

They noted that the infrastructure development faces the challenge of inadequate capital investment.

The countries expressed willingness to work together to innovate the application of public-private partnership in conformity with the laws and regulations of the countries to efficiently utilise the financial resources.

They agreed to consult relevant stakeholders to hold a second BCIM Car Rally at the second half of the year aiming to enhance mutual understanding and cross-border friendship.

The four countries commended the role of BCIM Business Council and encourage entrepreneurs of the four countries to participate in all kinds of international economic and trade exhibitions in this region.

The parties agreed to further deepen cooperation in the social, cultural and education sectors.

They also reached a consensus to strengthen regional capacity building to provide intellectual support and services to regional economic and social development.

The four countries agreed that cooperation in the fields of science and technology, public health, tourism, environmental protection, climate change and poverty reduction should also be promoted.

Earlier in his opening remarks, Minister Tipu Munshi said, “We must see BCIM EC much go beyond the initial concept of point-to-point connectivity.”

The 14th meeting of the BCIM Forum will be held in India.